The Beatles founder John Lennon signed his last autograph on the night of his death on the 8th December 1980. The famous signed Double Fantasy album which he signed for his killer Mark David Chapman was not his actual last autograph.

When John & Yoko were leaving the Dakota building in New York where they lived, Mark Chapman approached John holding his newly released Double Fantasy album. John then took the album off Marks hands and signed his autograph and also added the date 1980 in biro pen.

This album was famously known as Johns last ever autograph but in fact it was not. 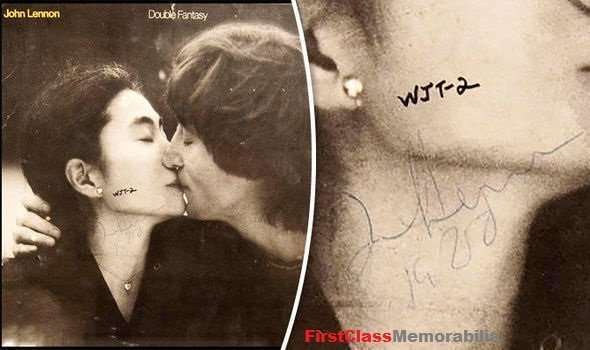 Furthermore, John mistakenly thought it was for the person who gave him the guitar strings the day before. So John signed a Record Plant tape sticker “To Karl, who strung me along, thanks John Lennon 1980. John also drew a self-portrait caricature. John Lennon then left the record plant by limousine at approximately 10:30 pm. Arriving at The Dakota at approximately 10:50 he was shot dead by Mark Chapman. This would be the last autograph John Lennon would ever sign. 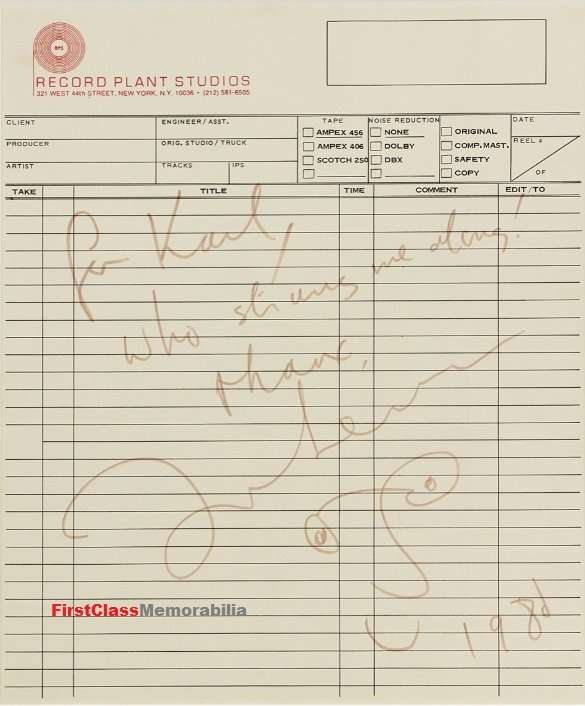 The same night at the recording studio before the fatal death of John Lennon, he signed two autographs that night. The one above for Thom Penunzio who asked for it to be dedicated to his friend Karl. Or was it this one below that he and Yoko both signed for the switchboard operator of the studio Rabiah Seminole.

Additionally, John signed the note for Rabiah Seminole, a switchboard operator at his New York recording studio. Just before he was shot dead in December 1980. He drew his self-portrait and signed his name as he left the Record Plant studio in New York on 8 December.

Fifteen minutes later, he was gunned down outside his apartment.

Seminole kept the signed note on her bedroom wall for years before deciding to sell it via memorabilia website.
“I didn’t want to capitalise on John’s death, but he was a nature lover and I think he would have wanted me to sell it for the horses,” said Seminole. She sold the note to raise money for her Virginia horse sanctuary. 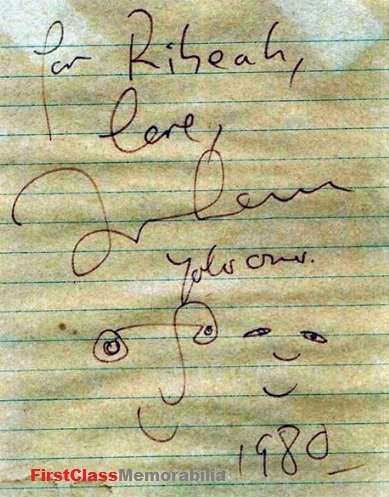 We are always on the look out for genuine John Lennon or The Beatles Autographs. If you have anything to sell please don’t hesitate to contact us.