The Rolling Stones an English rock band formed in London in 1962. Active for almost six decades, they are one of the most popular and enduring bands of the rock era. In the early 1960s, the Rolling Stones pioneered the gritty, heavier-driven sound that came to define hard rock. Their first stable line-up comprised vocalist Mick Jagger; multi-instrumentalist Brian Jones, guitarist Keith Richards, bassist Bill Wyman, and drummer Charlie Watts. During their formative years Jones was the primary leader: he assembled the band, named it, and drove their sound and image.

After Andrew Loog Oldham became the group’s manager in 1963, he encouraged them to write their own songs. Jagger and Richards became the primary creative force behind the band, alienating Jones, who developed a drug addiction that interfered with his ability to contribute meaningfully.

Rooted in blues and early rock and roll, the Rolling Stones autographs started out playing covers; and at the forefront of the British Invasion in 1964, also being identified with the youthful and rebellious counterculture of the 1960s. They then found greater success with their own material as “(I Can’t Get No) Satisfaction” (1965); “Get Off of My Cloud” (1965) and “Paint It Black” (1966) became international No. 1 hits. Aftermath (1966) – their first entirely original album – is considered the most important of their formative records.

In 1967, they had the double-sided hit “Ruby Tuesday”/”Let’s Spend the Night Together” and experimented with psychedelic rock on Their Satanic Majesties Request. They returned to their roots with such hits as “Jumpin’ Jack Flash” (1968) and “Honky Tonk Women” (1969); and albums such as Beggars Banquet (1968), featuring “Sympathy for the Devil”, and Let It Bleed (1969); featuring “You Can’t Always Get What You Want” and “Gimme Shelter”. Let It Bleed was the first of five consecutive No. 1 albums in the UK.

Jones left the band shortly before his death in 1969, replaced by guitarist Mick Taylor. That year they were first introduced on stage as ‘The Greatest Rock and Roll Band in the World’. Sticky Fingers (1971), which yielded “Brown Sugar” and included the first usage of their tongue and lips logo, was their first of eight consecutive No. 1 studio albums in the US. Exile on Main St. (1972), featuring “Tumbling Dice”, and Goats Head Soup (1973), yielding the hit ballad “Angie”, were also best sellers. Taylor, replaced by Ronnie Wood in 1974.

Also, the band continued to release successful albums including their two largest sellers: Some Girls (1978), featuring “Miss You”; and Tattoo You (1981), featuring “Start Me Up”. Steel Wheels (1989) widely considered a comeback album and followed by Voodoo Lounge (1994), a worldwide number one album. Both releases were promoted by large stadium and arena tours; as the Stones continued to be a huge concert attraction; by 2007 they had four of the top five highest-grossing concert tours of all time.

Additionally, From Wyman’s departure in 1993 to Watts’ death in 2021; the band continued as a four-piece core, with Darryl Jones playing bass on tour and on most studio recordings. Their latest album, Blue & Lonesome (2016), became their twelfth UK number-one album.

The Rolling Stones autographs’ estimated record sales of 200 million makes them one of the best-selling music artists of all time. The band has won three Grammy Awards and a Grammy Lifetime Achievement Award. Inducted into the Rock and Roll Hall of Fame in 1989 and the UK Music Hall of Fame in 2004. Furthermore, in 2019, Billboard magazine ranked the Rolling Stones second on their list of the “Greatest Artists of All Time” based on US chart success. Besides, they are ranked fourth on Rolling Stone‘s list of the Greatest Artists of All Time. 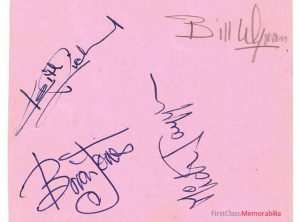 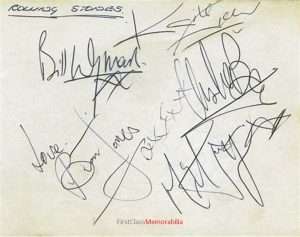 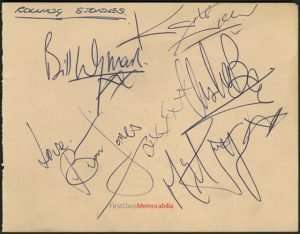 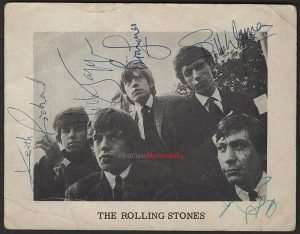 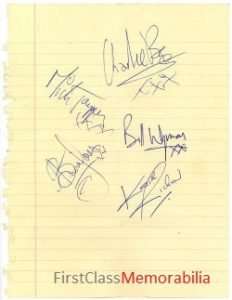 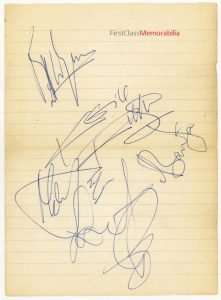 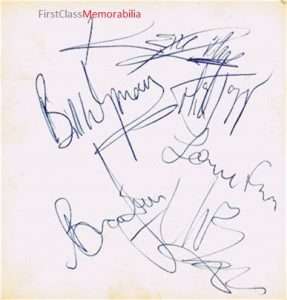