How much are The Rolling Stones Autographs worth?

The English rock group The Rolling Stones was founded in London in 1962. One of the most well-known and enduring bands of the rock era, active for six decades. The Rolling Stones invented the gritty, heavier-driven sound that would later come to be known as hard rock in the early 1960s. Mick Jagger, Brian Jones, Keith Richards, Bill Wyman, and Charlie Watts made up their initial permanent line-up. Jones was the band’s principal motivator, assembling, naming, and directing their sound and appearance. The group’s manager, Andrew Loog Oldham, urged them to create their own music after he took over in 1963. Jones, whose drug addiction made it difficult for him to actively participate, excluded as Jagger and Richards took over as the band’s principal creative forces.

Jones, replaced by guitarist Mick Taylor before leaving the group shortly before his passing in 1969. They made their stage debut that year under the moniker “The Greatest Rock and Roll Band in the World.” It produced the song “Brown Sugar” and featured the band’s tongue and lips emblem for the first time. Sticky Fingers (1971) was the first of their eight straight No. 1 studio albums in the US. Both Goats Head Soup (1973), which produced the popular song “Angie,” and Exile on Main St. (1972), which featured “Tumbling Dice,” were top sellers. Besides, Ronnie Wood took Taylor’s place in 1974. The band continued to put out successful albums, two of which were Tattoo You (1981), which featured “Start Me Up,” and Some Girls (1978), which featured “Miss You”.

Voodoo Lounge (1994), a global number one album, came after Steel Wheels (1989). Which largely regarded as a comeback record. The Stones continued to be a popular concert draw, and by 2007, they had four of the five highest-grossing concert tours ever. Both albums promoted by massive stadium and arena tours. The band maintained a four-piece core from Wyman’s departure in 1993 until Watts’ passing in 2021, with Darryl Jones performing bass on tour and on the majority of studio albums. Furthermore, Blue & Lonesome, their 2016 album, achieved their twelfth UK number-one album.

Value of The Rolling Stones Memorabilia

The Rolling Stones are among the best-selling musicians of all time, with projected album sales of 200 million. Also, Three Grammy Awards and a Grammy Lifetime Achievement Award have been given to the band. They were admitted into the UK Music Hall of Fame in 2004 and the Rock & Roll Hall of Fame in 1989, respectively. The band is among the top of the list according to Rolling Stone and Billboard magazines.

This photograph, signed by the band in 2005 whilst touring Canada. 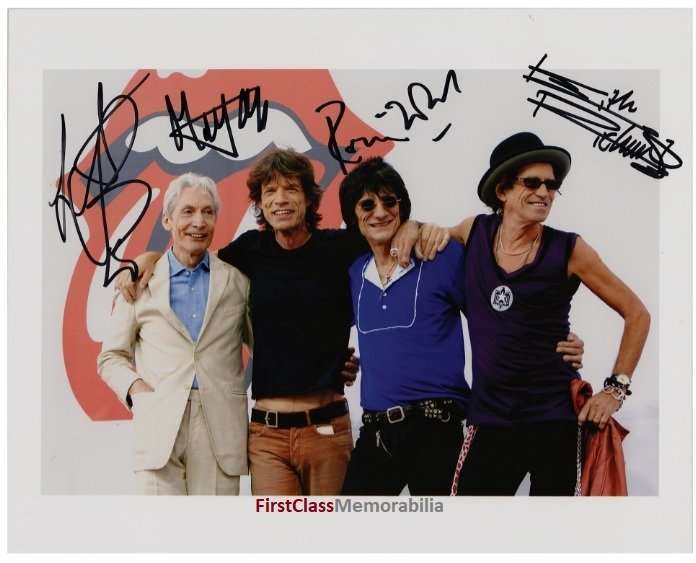 The Rolling Stones Autographs for sale

3 replies on “How much are The Rolling Stones Autographs worth?”