Authentic Take That Autographs Signed Music Memorabilia. Genuine autographs from the members of the group Take That.

An English pop group called Take That was founded in Manchester in 1990. Mark Owen, Gary Barlow, and Howard Donald make up the group at the moment. Robbie Williams Autographs and Jason Orange were also on the original lineup. Owen and Williams initially provided supporting vocals, while Donald and Orange served largely as dancers. Barlow is the group’s lead singer and major lyricist.

A total of 12 of the group’s singles have reached number one on the UK Singles Chart, including “Back for Good,” “Never Forget,” “Patience,” and “Greatest Day,” which have all reached the top 40 and the top five, respectively. Eight of their albums peaked at number one on the UK Albums Chart as well. The group has 39 number-one albums and 56 number-one singles internationally. Eight Brit Awards were given to them; they won for Best British Group and Best British Live Act. Ivor Novello Award for Outstanding Contribution to British Music autographs was given to them in 2012. The British Phonographic Industry (BPI) reports that Take That has sold 11.4 million singles and 14 million albums in the UK. 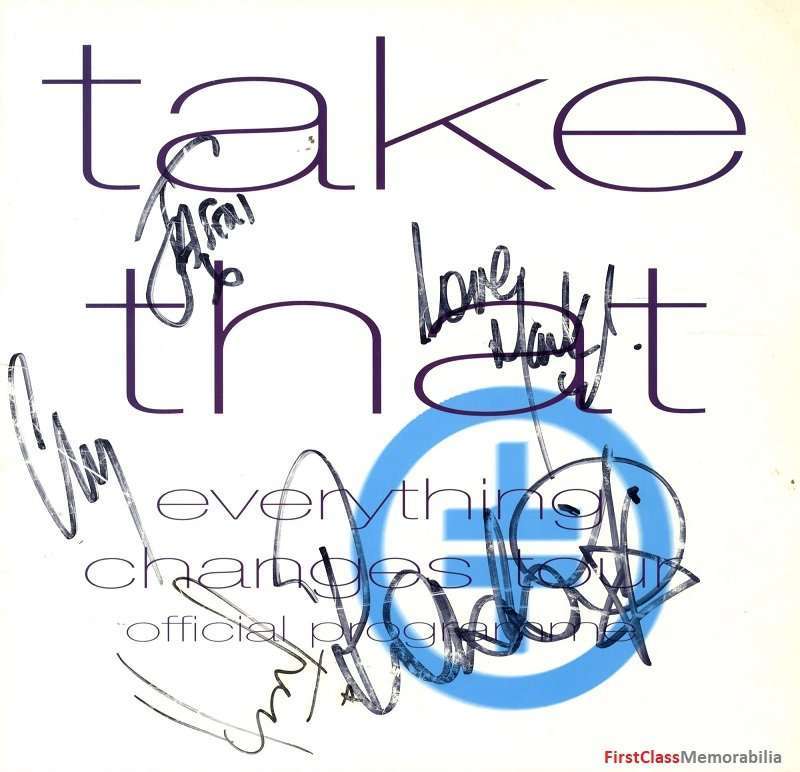 Before breaking up in 1996, the remaining four band members finished their global tour and released a last single before Williams quit the group in 1995. A four-piece version of Take That without Williams formally announced a 2006 UK reunion tour under the name The Ultimate Tour. After producing a 2005 documentary about the band called Take That: For the Record and releasing a new greatest hits album. The group’s fifth studio album, The Circus. Released in 2008 after their fourth studio album, Beautiful World, was published in 2006. On May 9, 2006, it was reported that the group will be recording new songs together once more. 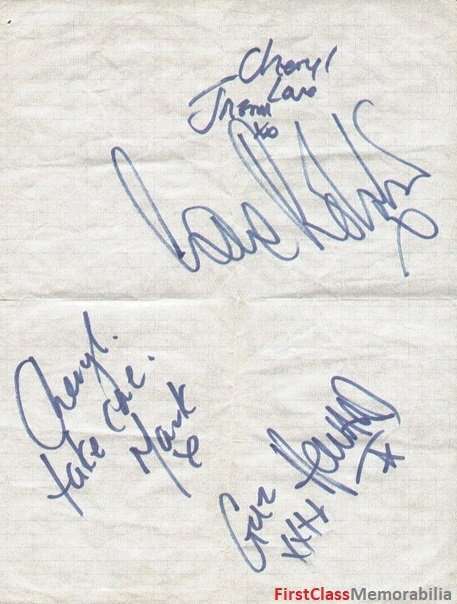 How much are Take That Autographs worth?

As a quartet, the group found new success, scoring numerous chart successes in the UK and around Europe and selling more than 45 million records globally. Williams returned to Take That in 2010 for the group’s Progress, their sixth studio album. It was Take That’s first new music since their 1995 album Nobody Else. Released on November 15 of that same year. It became the second-fastest-selling album in British history and the fastest-selling album of the twenty-first century.

With Progress Live, Take That broke the previous record for the UK’s fastest-selling tour of all time set by their Circus Live Tour in 2009. Named Best British Group at the Brit Awards. At the London 2012 Olympic Games’ closing ceremony. The group had a performance, performing “Rule the World” when the Olympic Flame extinguished. Currently ranked 15th overall, making them the most successful boy band in UK chart history. According to a list of the biggest-selling singles artists in British music history published by the Official Charts Company that same year. Three of their albums are among the top 60 best-selling albums in UK chart history. And four of their albums are among the best-selling albums of the millennium.