Stephen John Finnan (born 24 April 1976) is an Irish former international footballer who played as a right back.

He is the only player to have played in the World Cup, UEFA Champions League, UEFA Cup, Intertoto Cup, all four levels of the English league football and the Football Conference. Among the honours won during his career was the 2005 UEFA Champions League Final for Liverpool. Finnan, known for his attacking role and ability to cross the ball.

He played 52 internationals for the Republic of Ireland from his debut in 2000, scoring twice. He played for them at the 2002 FIFA World Cup.

Finnan, born in the Janesboro area of Limerick, and moved to Chelmsford, England, at a young age. He began his career playing in Wimbledon’s youth system, but he joined non-League club Welling United in 1993 after being released at the age of 16. Finnan turned professional when he signed with Birmingham City in 1995, who paid a fee of £100,000 to Welling United to acquire his services. He scored his first professional goal against Watford.

Finnan made his Liverpool debut against Chelsea signed memorabilia on 17 August 2003. His first season disrupted by injury, but in 2004–05, he established himself as the first-choice right back and a firm fan favourite. The season was a highly successful one for Finnan. He scored his first and only goal for Liverpool autographed memorabilia against West Bromwich Albion, played in the League Cup final, and was in the starting eleven as Liverpool won the Champions League Final, though a thigh injury meant he was substituted at half time. Finnan’s goal against WBA meant that he became only the second player to score in each of the five highest divisions of English football; the first was Jimmy Willis.

In the 2005–06 season, Liverpool broke their record for number of points in a Premier League season; finishing on 82 points with Finnan being ever present. At the end of the season he picked up another medal with Liverpool, winning the FA Cup.

Finnan played for Liverpool as first choice right back for the 2006–07 season; despite heavy competition from newly arrived teammate Álvaro Arbeloa. He started in the 2007 UEFA Champions League Final; and subbed off after 88 minutes, Liverpool went on to lose the game 2–1. In July 2007, Finnan agreed a new two-year contract to remain with Liverpool.

The following season, Liverpool’s success continued as they finished third in the League and reached the semi-finals of the Champions League. Finnan took his total appearances for Liverpool past the 200 mark; and also made it into the top 100 capped Liverpool players of all time. Finnan featured in 35 games, but lost his starting place, manager Rafa Benítez often preferring Arbeloa to start. In the summer of 2008, after the arrival of fullback Philipp Degen at the club from Borussia Dortmund, Finnan was linked with a move away from Anfield. He was offered by Liverpool as a makeweight in a deal to sign Gareth Barry from Aston Villa; the player accepted the move but the clubs were unable to agree a fee. He made a guest appearance in Jamie Carragher’s testimonial match in September 2010.

A Republic of Ireland Under-21 international, Finnan stepped up to the senior side in 2000 against Greece. He cemented his place in the Irish starting XI during the 2002 World Cup qualification matches, supplying the cross for Jason McAteer to score the only goal in a crucial 1–0 home win against the Netherlands in September 2001.

Additionally, Steve Finnan signed memorabilia appeared in all three of Ireland’s group E games; in the 2002 FIFA World Cup against Cameroon, Germany and Saudi Arabia. Ireland progressed to the second round of the tournament for only the third time in their history where they faced Spain autographs. The match ended 1–1 in extra time and went to penalties. Also, Steve Finnan autographs took a penalty and scored, but Ireland eventually lost 3–2.

Injury disrupted Finnan’s participation in the unsuccessful attempt to reach the Euro 2004 finals. A regular choice in the 2006 World Cup qualification games but Ireland failed to qualify for the finals.

He was again a regular selection in the 2008 Euro qualification games but Ireland did not qualify for the finals. Scored his second international goal in the group game against Cyprus in a 1–1 draw. He then announced his retirement from international football on 22 January 2008; after making 50 appearances for the Republic of Ireland. Tempted by the prospect of working with the newly appointed Ireland manager Giovanni Trappatoni, Finnan came out of retirement in August 2008 to be included in the squad to face Norway in an international friendly. 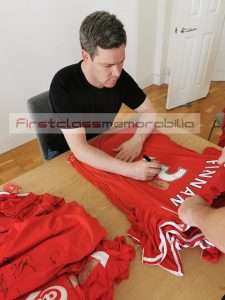 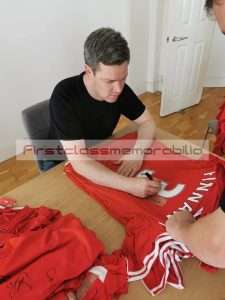 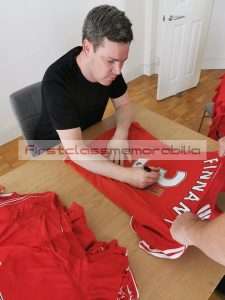