Since 1920, Spain’s national football squad (Spanish: Selección Espaola de Ftbol) has competed in international men’s football games. The Royal Spanish Football Federation, Spain’s governing body for football, is in charge of it. Also, Spain is one of only eight national teams that have won a FIFA World Cup, having competed in 16 of the 22 tournaments and qualifying consecutively since 1978. Spain won three continental titles after competing in 11 of the 16 UEFA European Championships. Spain presently competes in the UEFA Nations League in Division A, among the rest of Europe’s best teams. Their finest performance came in the 2020–21 season, when they advanced to the final before losing to France.

Spain is the only national team to win three major titles in a row, having won the first European World Cup outside of Europe in 2010 and the only one to win back-to-back European Championships in 2008 and 2012. Spain won the FIFA Team of the Year award seven times between 2008 and 2013, second only to Brazil. From the beginning of 2007 until the end of 2009, the Spanish national football team went 35 games without losing, an achievement they shared with Brazil and which was at the time a world record. Many analysts and observers consider the 2008–2012 Spanish squad to be one of the best ever teams in world football history.

Ignacio Javier Gómez Novo (born 26 March 1979) is a Spanish footballer who plays as a forward. He transferred from Huesca to Scottish club Raith Rovers in 2001 and Dundee a year later. In July 2004, he moved to Rangers for £450,000. During his first season at the club he scored 25 goals and won a league and League Cup double. 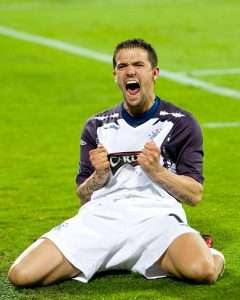