William “Sandy” Pullar Jardine (December 31, 1948 – April 24, 2014) a Scottish professional footballer; who represented Scotland and played for Rangers and Hearts. Appeared in almost 1000 professional games and twice named Player of the Year by the Scottish Football Writers Association. Winning multiple trophies with Rangers, including two domestic trebles in 1976 and 1978; and a member of the 1972 European Cup Winners’ Cup-winning team. He played in the 1974 and 1978 World Cups for Scotland, earning 38 caps. Jardine also worked for Rangers after co-managing Hearts with Alex MacDonald.

Jardine died 18 months after being diagnosed with liver cancer in April 2014.

In 1964, Jardine joined the Rangers. Signed as a midfielder and spent a few years in the reserves before making his debut; at the age of 18 in a 5–1 league triumph at home against Hearts on February 4, 1967. Rangers had just been knocked out of the Scottish Cup by Berwick Rangers a week before this encounter. A few weeks later, on March 18, 1967; he scored his first Rangers legends memorabilia goal in a league encounter against Ayr United. Jardine also competed in the 1967 European Cup Winners’ Cup Final, losing 1–0 after extra time against Bayern Munich.

Jardine played in a variety of defensive positions during his time with manager Davie White, including as a centre-forward, before settling down as a right full-back under new boss Willie Waddell at the start of the 1970–71 season. He was a revelation at right-back; a powerful player who relished charging forward, he possessed an outstanding turn of pace that allowed him to rarely be caught out of place. He spent the most of his 674 appearances for the club in this position.

Rangers defeated Celtic 1–0 in the Scottish League Cup Final in 1970, giving him his first major prize. He was an ever-present in the Rangers side that reached the 1972 European Cup Winners’ Cup Final, appearing in all eight games en route to the final and scoring the first goal in a 2–0 win over Bayern Munich in the semi-final. Jardine went on to assist Rangers win the final 3–2 at the Nou Camp in Barcelona autographs, defeating Moscow Dynamo. 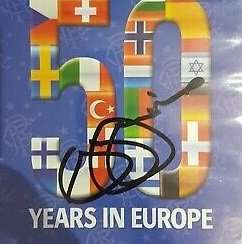 From April 27, 1972, to August 30, 1975, he did not miss a single game for Rangers, appearing in 171 straight games. During this time, he continued to have success; in 1974–75, he helped Rangers win their first Scottish league title in 11 years, and the Scottish Football Writers’ Association named him Player of the Year for his efforts. Besides, Jardine was an important member of the Rangers’ domestic treble-winning teams in 1975-76 and 1977-78.

Furthermore, Rangers were in decline by the early 1980s, and manager John Greig Autographs reluctantly gave Jardine a free transfer to Hearts in mid-1982. They were good friends because they both grew up and lived in Edinburgh, and they used to train and play for Rangers together when they were younger. Jardine, permitted to depart because of his long service and claimed desire to finish his playing career with the team he grew up supporting.