The band with the most number-one singles (14), weeks overall (85) at the top, and top 10 songs (25), according to Billboard Alternative Songs, is the most successful in the genre’s history. They have received a star on the Hollywood Walk of Fame in 2022, six Grammy Awards, and induction into the Rock & Roll Hall of Fame in 2012.

In Los Angeles, Kiedis, Flea, guitarist Hillel Slovak, and drummer Jack Irons created the Red Hot Chili Peppers. Slovak and Irons were absent from the band’s 1984 self-titled first album because to obligations to other bands. Instead, guitarist Jack Sherman and drummer Cliff Martinez appeared on the record. For their second album, Freaky Styley (1985), Slovak regrouped, and Irons did the same for their third, The Uplift Mofo Party Plan (1987). After Slovak overdosed on drugs in June 1988, Irons left.

The Red Hot Chili Peppers released Mother’s Milk (1989) and their first significant commercial success. Blood Sugar Sex Magik, with new members Frusciante and Smith (1991). In 1992, Frusciante quickly departed their newfound prominence because of a tour. Succeeded by Dave Navarro, who appeared on the band’s sixth album, One Hot Minute, following a string of temporary guitarists (1995). Despite being a hit, the album couldn’t match Blood Sugar Sex Magik’s popularity or critical acclaim. Throughout the 1990s, Frusciante and Kiedis battled drug addiction.

Frusciante returned to the group in 1998 after Navarro left. Their seventh album, Californication (1999), which sold 16 million copies worldwide, became their biggest commercial hit. Both Stadium Arcadium (2006) and By the Way (2002). were popular albums; Stadium Arcadium, their first to top the Billboard 200 chart. Josh Klinghoffer replaced Frusciante after his second departure in 2009 to concentrate on his solo career; Klinghoffer appeared on I’m with You (2011) and The Getaway (2016) before Frusciante returned in 2019. In 2022, they issued their 12th album, titled Unlimited Love. 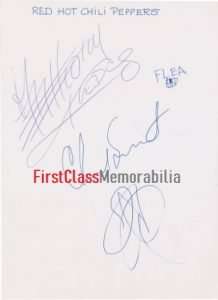 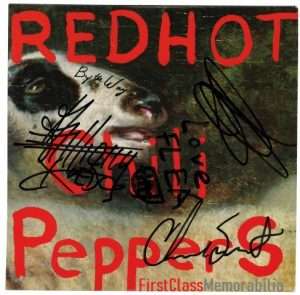 Signed By The Way Album 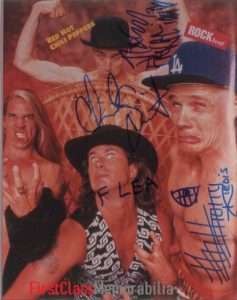