Our team has been working hard to bring you the best selection of Rangers signed football shirts on the market. Check out our collection today!

We’ve got all kinds of great Rangers signed football shirts in stock at FirstClassMemorabilia. Whether you’re looking for an autographed shirt, ball, or other memorabilia, we’ve got it all.

If you’re looking for authentic Rangers signed football shirts, then you’ve come to the right place. At FirstClassMemorabilia, we only sell genuine signed Rangers fc shirts. All of our shirts are 100% authentic signed by the Rangers player. 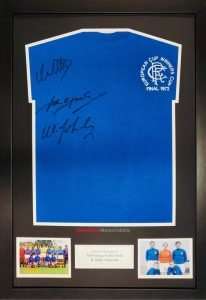 Rangers Football Team is a Scottish professional football club based in Glasgow’s Govan district that competes in the Scottish Premiership. Outside of Scotland, it is commonly referred to as Glasgow Rangers, despite the fact that this is not its actual name. Rangers, Scotland’s fourth-oldest football team, created by four teenage boys while walking through West End Park in March 1872. Where they discussed the concept of starting a football Autographs club. Playing its inaugural match against the now-defunct Callander at the Glasgow Green in May of the same year. Ibrox Stadium, constructed by stadium architect Archibald Leitch and opened in 1929. A Category B listed building and Scotland’s third-largest football stadium. The club’s uniform has traditionally been royal blue. 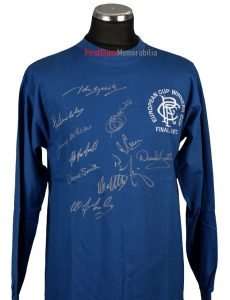 Rangers is the most successful football club in Scotland. The club has won the Scottish League title 55 times, the Scottish Cup 34 times, the Scottish League Cup 27 times, and the domestic triple seven times, a global record shared with rival Celtic. Fiurthermore, Rangers won the European Cup Winners’ Cup in 1972 after reaching the finals twice before. In 1961 (the first British club to do it) and 1967. When the team reached the UEFA Cup Final in 2008, they lost two more European finals. And their fourth runner-up finish in European competition occurred in the UEFA Europa League Final in 2022. 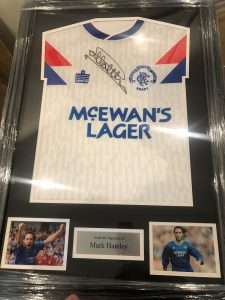 One reply on “Rangers Signed Football Shirts For Sale”