Philip Bernard Thompson (born 21 January 1954) is an English retired footballer; who played as a defender for Liverpool autographs team of the 1970s and 1980s. During this time, he also represented the England national football team on 42 occasions, and captained England on six occasions. After retiring as a player, he later served Liverpool as assistant manager and; during the 2001–02 season. Acted as caretaker for 6 months while manager Gérard Houllier was ill. He was a pundit on Soccer Saturday on Sky Sports for 22 years until August 2020. Does on and off work as a pundit for TV 2 (Norway); and is a regular Visiting Fellow at the University of Liverpool where he teaches on the Football Industries MBA.

Thompson was born in Kirkby, Lancashire, and was a Liverpool supporter, who stood on The Kop as a boy. His dreams came true when he signed as a professional for the club on 22 January 1971, the day after his 17th birthday

He made his first team debut the following year against rivals Manchester United at Old Trafford. With the Reds 2–0 up in the 81st minute Shankly took off John Toshack, replacing him with the 18-year-old defender. The move was intended to tighten up the defence and keep a clean-sheet; but three minutes later, Emlyn Hughes popped up with a goal for Liverpool, with the game ending this way. In 1973, Liverpool won a double haul of trophies. The League championship and UEFA Cup and Thompson played a role in both successes earning league and UEFA Cup medals in the process. The next season led to him displacing Larry Lloyd from the side altogether and pushed Tommy Smith across to full back. He settled into a defensive partnership with club captain Hughes.

Thompson man-marked Malcolm Macdonald out of the game as Liverpool beat Newcastle United 3–0 in the 1974 FA Cup Final; this after MacDonald had boasted what he was going to do to the Reds in the game. He remained a major part of the team which, again, won the League and UEFA Cup double in 1976.

1976 was also the year in which he was called up to play for England for the first time; his debut coming on 24 March in a 2–1 win over Wales in a friendly at the Racecourse Ground at Wrexham. During a summer mini-tournament held in the United States on 28 May 1976, Thompson scored his one and only goal for England in a friendly match against Italy in New York.

Liverpool’s most productive season followed in 1977, but Thompson was to unluckily miss out. Although he played enough games to guarantee a medal when Liverpool retained the title, he suffered an injury which denied him a role in the exciting charge towards a unique treble. As Liverpool limped into the finals of both the FA Cup and European Cup. The veteran Smith took Thompson’s place; while Liverpool lost the 1977 FA Cup Final to Manchester United. They won their first European Cup a few days later in Rome. By beating Borussia Mönchengladbach (with Smith scoring Liverpool’s second goal).

Thompson recovered from his injury and returned to the defence the following season. Scoring a goal in Liverpool’s victory over Kevin Keegan’s Hamburg in the 1977 UEFA Super Cup final. Liverpool reached their first League Cup final at Wembley. (A competition which they had previously not taken seriously) and after a goalless draw against Nottingham Forest, the game went to a replay. It was a disappointing evening for Thompson. Who committed the foul on Forest midfielder. John O’Hare that led to the penalty that won the game for Brian Clough’s men. Thompson no doubt counts himself a little unlucky – although he did commit the foul. Replays appeared to show that it took place outside the penalty area. Liverpool also surrendered the League title to Forest, but managed to retain the European Cup with a win over FC Bruges. A game in which Phil Thompson signed memorabilia this time played.

Thompson was accompanied by a new central defensive partner in Alan Hansen as Liverpool regained the title in 1979. When Hughes left the club for Wolves late in 1979, Thompson appointed as captain and managed to lift the League trophy in 1980. He continued to play frequently for England and was in the squad. Which qualified for a major tournament’s finals for the first time in a decade. Though England’s performances at the 1980 European Championships in Italy were disappointing.

Thompson’s proudest moment as Liverpool skipper came in 1981 when he lifted the European Cup after a 1–0 victory over Real Madrid in the Paris final—the club’s third success in the competition. Thompson also stepped up to receive the League Cup after a replay win against West Ham United. The club’s first of four consecutive successes in the competition.

Bob Paisley upset Phil Thompson autographs Liverpool the following season when he decided to hand the captaincy to Graeme Souness autographs, though Thompson continued to play regularly in defence, winning further title medals in 1982 and 1983. He was in the team which retained the League Cup in 1982. Missed the victory in the 1983 final due to injury.

From 1984, Thompson’s opportunities as a Liverpool player were diminishing, with Hansen now being paired with the younger Mark Lawrenson. Liverpool won the title, League Cup and European Cup in this year; but Thompson did not qualify for a medal in any of these successes. 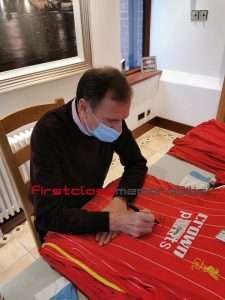 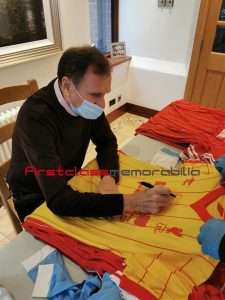 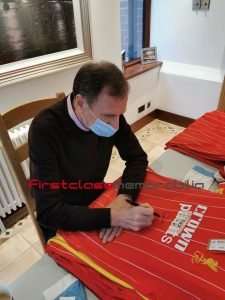