Sir Peter Thomas Blake, an English pop artist born on June 25, 1932; best known for co-designing the album sleeve for the Beatles autographs‘ Sgt. Pepper’s Lonely Hearts Club Band. His other best-known creations include the Live Aid concert poster, the covers for two of The Who‘s albums, and the Band Aid single “Do They Know It’s Christmas?” The 2012 Brit Awards trophy was likewise created by Blake.

Blake, regarded as a key player in the pop art movement and one of the most well-known British pop artists. His fascination with imagery from popular culture, which has influenced his collages, is central to his paintings. He received a knighthood in 2002 at Buckingham Palace for his contributions to art.

Beginning in the late 1950s, collaged components were frequently used in Blake’s paintings; which frequently featured imagery from ads, music hall performances, and wrestlers. The Institute of Contemporary Arts held group shows that featured Blake. First associated with the developing British Pop Art style in the “Young Contemporaries” show of 1961; where he exhibited alongside David Hockney and R. B. Kitaj. Blake’s Self Portrait with Badges won the John Moores Junior prize in 1961. Altogether, Along with Pauline Boty, Derek Boshier, and Peter Phillips, he appeared in the 1962 BBC television broadcast of Ken Russell’s Monitor film on pop art, Pop Goes the Easel. Overall, this brought him to the attention of a larger audience.

Then again, From 1963, Blake represented by Robert Fraser placing him at the centre of Swinging London and bringing him into contact with leading figures of popular culture. Equally, Blake had his first solo exhibition with Robert Fraser Gallery in 1965 and appeared on the front cover of LIFE International in a photograph by Lord Snowdon. Also, given the final exhibition held at Robert Fraser Gallery which closed in 1969. The same year, Blake had his first exhibition with Leslie Waddington who became his lifelong supporter and representative.

In 1981, Blake elected a Royal Academician. For his contributions to art, named Knight Bachelor in the 2002 Birthday Honours; and Commander of the Order of the British Empire in the 1983 Birthday Honours. At an investiture ceremony held at Buckingham Palace, Prince Charles knighted Blake. Blake’s art was the subject of retrospective exhibitions at the Tate in 1983 and Tate Liverpool in 2008. The artist inaugurated the Sir Peter Blake Music Art Gallery; at the University of Leeds’ School of Music in February 2005. Besides, Twenty of Blake’s album sleeve designs are on display in the permanent exhibition. Including the one and only signed print of his Sgt. Pepper’s cover art that’s ever been seen in public.

Furthermore, the public debut of Blake’s Boogie For Stu album cover in March 2011 commemorated his honorary DMus degree from the University of Leeds. Again, Peter Blake autographs received an honorary doctor of art degree from Nottingham Trent University on July 18, 2011. Currently, at the Royal West of England Academy in Bristol, named an honorary academician in 2014. 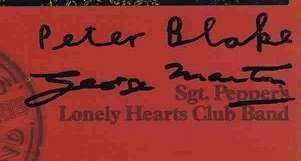