Pelé was born Edson Arantes do Nascimento on October 23, 1940. Former Brazilian professional footballer who played as a forward. He was one of the most successful and popular sports stars of the twentieth century, regarded as one of the best players of all time and dubbed “the greatest” by FIFA. The International Olympic Committee named him Athlete of the Century. And Time named him one of the 100 most influential individuals of the twentieth century. Pelé was named World Player of the Century by the International Federation of Football History & Statistics (IFFHS) in 2000, and he was also one of two joint winners of the FIFA Player of the Century award. His 1,279 goals in 1,363 games, including friendly, is a Guinness World Record. 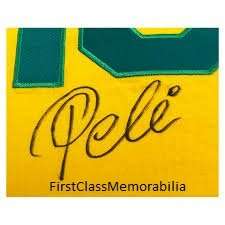 Additionally, Pelé joined Santos at the age of 15 and the Brazil national team at the age of 16. He was the only player to win three FIFA World Cups throughout his international career, in 1958, 1962, and 1970. Following the 1958 competition, dubbed O Rei (The King). Pelé is Brazil’s all-time best scorer, with 77 goals in 92 appearances. With 643 goals in 659 games for Santos, he is the club’s all-time leading scorer.

He led Santos to the Copa Libertadores in 1962 and 1963, as well as the Intercontinental Cup in 1962 and 1963. Pelé, credited with popularising the phrase “The Beautiful Game” with his “electrifying skill and predilection for spectacular goals.” His teams travelled globally in order to capitalise on his fame. Pelé Autograph the highest-paid athlete in the world for a time during his playing career. Pelé has been a worldwide advocate for football and has had numerous acting and commercial endeavours since quitting in 1977. Elected honorary president of the New York Cosmos in 2010.

Then again, Pelé, who averaged nearly a goal per game, skilled at striking the ball with either foot and anticipating his opponents’ moves on the field. As a striker, he could drop deep and take on a playmaking role, providing assists with his vision and passing abilities, and dribbling to get past opponents. In Brazil, he is regarded as a national hero for his football memorabilia achievements. His breakthrough at the 1958 World Cup, when he became the first black global sporting celebrity, was an inspiration. Throughout his career and after retiring, Pelé received numerous individual and team honours for his on-field prowess, record-breaking exploits, and legacy in the sport.