Nicholas Berkeley Mason, CBE (born 27 January 1944) is an English drummer and founder member of the progressive rock band Pink Floyd. The only member to feature on every Pink Floyd album; and the only constant member since its formation in 1965. He co-wrote Pink Floyd compositions such as “Echoes”, “Time”, “Careful With That Axe, Eugene” and “One of These Days”. In 2018, he formed a new band, Nick Mason’s Saucerful of Secrets, to perform music from Pink Floyd’s early years.

Mason was born in Birmingham and brought up in Hampstead, London. His father was documentary filmmaker Bill Mason. He attended the Hall School, Hampstead, and Frensham Heights School, near Farnham, Surrey. While studying architecture at the Regent Street Polytechnic (now the University of Westminster), he formed a band, Sigma 6, an early incarnation of Pink Floyd, with Roger Waters, Bob Klose and Richard Wright in 1964. In September 1963, Waters and Mason moved into a flat near Crouch End in London. Mason moved out after the 1964 academic year.

Pink Floyd released their debut album, The Piper at the Gates of Dawn, in 1967. Mason has played on every Pink Floyd album since. The only Pink Floyd compositions credited solely to Mason are “The Grand Vizier’s Garden Party Parts 1–3” (from Ummagumma) and “Speak to Me” (from The Dark Side of the Moon). The track “Nick’s Boogie” was named after him.

Besides, the only times Mason’s voice has been included on Pink Floyd’s albums are “Corporal Clegg”, the single spoken line in “One of These Days” and spoken parts of “Signs of Life” and “Learning to Fly” (the latter taken from an actual recording of Mason’s first solo flight) from A Momentary Lapse of Reason. Furthermore, he does, however, sing lead vocals on two unreleased but heavily bootlegged tracks; “Scream Thy Last Scream” (1967), penned by original leader Syd Barrett and “The Merry Xmas Song” (1975–76). In live performances of the song “Sheep”, he did the spoken section.

Despite legal conflicts over ownership of the name “Pink Floyd”; which began when Waters left the group in 1985 and lasted roughly seven years; Waters and Mason are reportedly on good terms. Mason joined Waters on the last two nights of his 2002 world tour to play drums on the Pink Floyd song “Set the Controls for the Heart of the Sun”; and played drums on some concerts of Waters’ European tour in 2006, and during performances in Los Angeles and New York City in the United States.

In July 2005, Mason, Gilmour, Wright, and Waters played together on stage; for the first time in 24 years at the Live 8 concert in London. Mason joined Gilmour and Wright again for the encore during Gilmour’s show at the Royal Albert Hall, London, on 31 May 2006. Mason has claimed to be the link between Gilmour and Waters. Then again, stated in 2006 that Pink Floyd had not officially disbanded, but with the death of Wright in 2008, the band effectively came to an end, as confirmed by David Gilmour.

In spite of this, Nick Mason autographs has continued to join Waters onstage on occasion. On 12 May 2007, Mason joined Waters on stage at Earls Court to play The Dark Side of the Moon. Again, on 12 May 2011, Mason was featured (along with Gilmour) on the encore “Outside the Wall” at a concert by Waters, who was performing The Wall in its entirety (Gilmour also performed on “Comfortably Numb” that night). While on the “Nick Mason’s Saucerful Of Secrets” 2019 tour of the United States; Waters joined Mason on stage in New York City for the 18 April performance and performed; “Set the Controls for the Heart of the Sun” ; while also humorously denying Mason an opportunity to bang the gong behind his drum kit; something Mason has frequently mentioned he had always wanted to do. 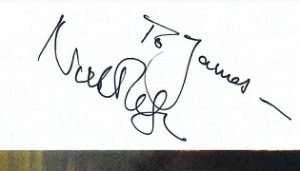 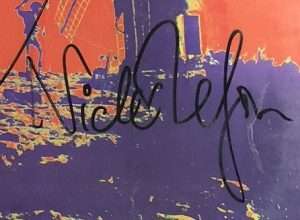