Michael J Fox Autographs Signed Back To The Future Memorabilia

Michael Andrew Fox  (born June 9, 1961), known professionally as Michael J. Fox. A Canadian-American retired actor, author, film producer, television director, and activist. Beginning his career in the 1970s, he first rose to prominence for portraying Alex P. Keaton on the NBC sitcom Family Ties (1982–1989). Fox achieved further recognition as protagonist Marty McFly in the Back to the Future film trilogy (1985–1990); alongside Christopher Lloyd Autographs who played Doc Brown. The trilogy’s critical and commercial success led to Fox headlining several films throughout the 1980s and 1990s, including The Secret of My Success (1987), Casualties of War (1989), and The Frighteners (1996). He returned to television on the ABC sitcom Spin City, where he portrayed the lead role of Mike Flaherty from 1996 to 2000.

In 1998, Fox publicly disclosed that he diagnosed with Parkinson’s disease seven years earlier. Fox subsequently became an advocate for finding a cure and founded the Michael J. Fox Foundation in 2000 to help fund research. Although the disease’s worsening symptoms forced Fox to have a less active career, he continued to make guest appearances on television, including recurring roles on the FX comedy-drama Rescue Me (2009) and the CBS legal drama The Good Wife (2010–2016) that garnered him critical acclaim. He also worked in voice-over, voicing the title character in the Stuart Little films (1999–2005) and the lead of the animated film memorabilia Atlantis: The Lost Empire (2001). His final major role was on the NBC sitcom The Michael J. Fox Show (2013–2014). Fox retired from acting in 2020 due to his declining health.

During his career, Michael J Fox Autographs won five Primetime Emmy Awards. Four Golden Globe Awards, two Screen Actors Guild Awards, and a Grammy Award. Also appointed an Officer of the Order of Canada in 2010; along with being inducted to Canada’s Walk of Fame in 2000 and the Hollywood Walk of Fame in 2002. Besides, his work advocating a cure for Parkinson’s disease, he received an honorary doctorate in 2010 from the Karolinska Institute.

How much is Michael J Fox Autograph worth? 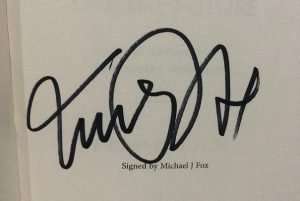 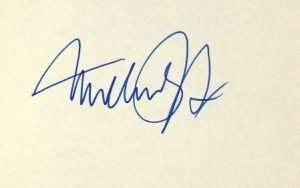