American heavy metal band Metallica was formed. Drummer Lars Ulrich and vocalist/guitarist James Hetfield started the band in Los Angeles in 1981. But it has spent the majority of its existence calling San Francisco home.
Along with Megadeth, Anthrax, and Slayer, the band was one of the original “big four” thrash metal bands because of its fast tempos, instrumentals, and violent musicianship. Hetfield and Ulrich, who are the band’s founders and main writers, veteran lead guitarist Kirk Hammett, and bassist Robert Trujillo make up the current lineup. Former band members Ron McGovney, Cliff Burton, and Jason Newsted are bassists, as are guitarist Dave Mustaine, who left the group to start Megadeth. 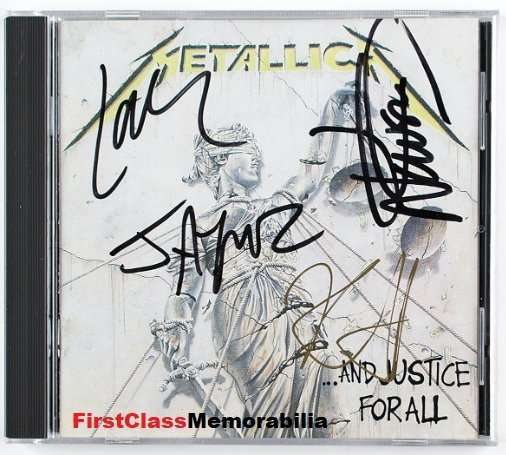 And Justice for All CD by Metallica, signed on the front cover in black felt tip by James Hetfield, Jason Newsted, and Lars Ulrich, and in gold ink by Kirk Hammett.

With the release of their third album, Master of Puppets (1986). Regarded as one of the heaviest metal albums and their best work, Metallica first experienced financial success. Metallica autographs received their first Grammy Award nomination for its following album,…And Justice for All (1988). Metallica’s fifth album of the same name from 1991 marked the group’s departure from thrash metal as a primary musical influence. It attracted a wider general audience, enjoyed significant economic success. Now sold over 16 million copies in the US, making it the best-selling album during the SoundScan era. 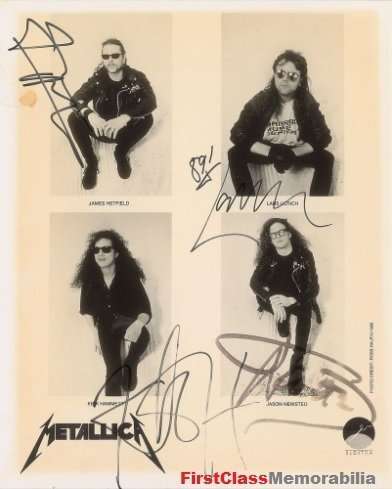 Metallica returned to its thrash metal roots with the release of its ninth album, Death Magnetic (2008). Which garnered similar accolades to that of the band’s previous albums, after experimenting with other genres and directions in later releases. Hardwired… to Self-Destruct is the group’s most recent album (2016). 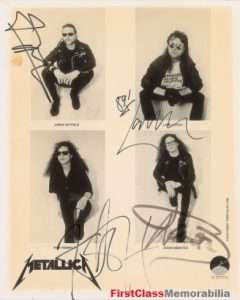 Metallica spearheaded the lawsuit against the peer-to-peer file-sharing website Napster in 2000. Then again, the band and numerous other musicians accused the company of sharing their copyright-protected works without permission, and the cases ended in a settlement. Besides, the renowned 2004 documentary Metallica: Some Kind of Monster focused on Metallica. And chronicled the band’s internal conflicts at the time of the tumultuous recording of its eighth album, St. Anger (2003). Metallica was admitted to the Rock & Roll Hall of Fame in 2009. Furthermore, Metallica: Through the Never, a 2013 concert movie in which the band performed live against a fictitious thriller plot. Co-written by the band and co-starred Dane DeHaan. 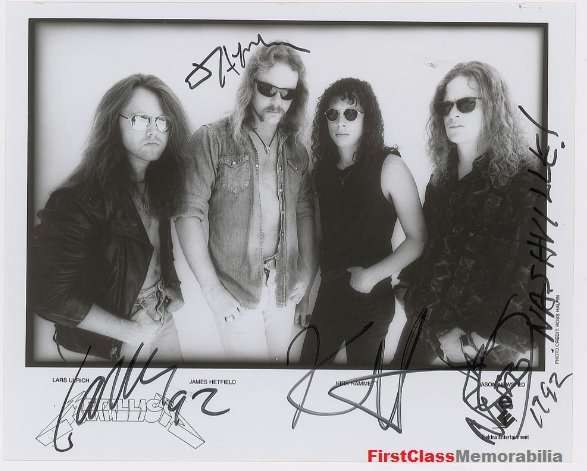