William John Paul Gallagher (born 21 September 1972) is an English singer and songwriter. He achieved fame as the lead singer and frontman of the rock band Oasis from 1991 to 2009, and later fronted the rock band Beady Eye from 2009 to 2014, before starting a solo career in 2017. Oasis had various line-up changes, though Gallagher and his older brother Noel remained as the staple members.

Gallagher, interested in joining a band called The Rain, which they agreed to rename. It became Oasis, and they invited Noel to join them as the lead guitarist. The band’s debut album, Definitely Maybe (1994), was a critical and commercial success. Their second album, (What’s the Story) Morning Glory? (1995), reached the top of the album charts in many countries, and their third studio album, Be Here Now (1997), became the fastest-selling album in UK chart history. Britpop eventually declined in popularity and Oasis failed to revive it, though all of their subsequent albums topped the UK charts and their final two albums, Don’t Believe the Truth (2005) and Dig Out Your Soul (2008) were hailed as being their best efforts in over a decade.

In August 2009, following Noel’s departure from Oasis, Gallagher and the remaining band members would go on to form Beady Eye, with whom he released two studio albums before they disbanded in 2014.

Also, In 2017, Gallagher began his solo career with the release of his debut solo album, As You Were (2017), which proved to be a critical and commercial success. Furthermore, It topped the UK Albums Chart and was the ninth fastest-selling debut album of the 2010s in the UK, with over 103,000 units sold in its first week. In 2018, the album was certified platinum with over 300,000 units sold in the UK. His second album, Why Me? Why Not, received mostly positive reviews and topped the UK charts upon its release in September 2019. This made it his tenth chart-topping album including eight with Oasis, and it also became the fastest-selling vinyl of 2019.

One of the most recognisable figures in music, Liam Gallagher autographs; noted for his distinctive singing style and his outspoken, brash, and abrasive personality. His attitude during Oasis’ commercial peak in the mid-1990s garnered much attention from the British tabloids; which often ran stories concerning his drug use and destructive behaviour. In March 2010, voted the greatest frontman of all time in a reader poll by Q magazine. In 2019, he received the MTV Europe Music Award for “Rock Icon”. 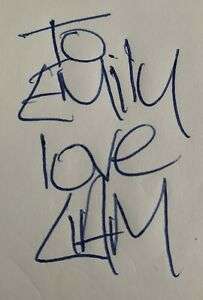 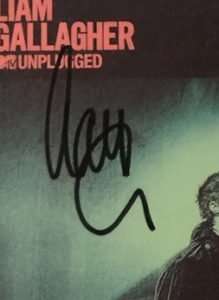 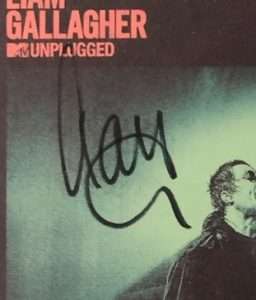