Lennox Claudius Lewis CM CBE (born 2 September 1965) is a boxing commentator and former professional boxer who competed from 1989 to 2003. He is a three-time world heavyweight champion, a two-time lineal champion. And remains the last heavyweight to hold the undisputed championship. Holding dual British and Canadian citizenship, Lewis represented Canada as an amateur at the 1984 and 1988 Olympics; in the latter event he won a gold medal in the super-heavyweight division after defeating Riddick Bowe in the final.

In his first three years as a professional, Lewis won several regional heavyweight championships, including the European, British, and Commonwealth titles. After winning his first 21 fights, he defeated Donovan Ruddock in 1992 to take over the number one position in the WBC rankings. He was declared WBC heavyweight champion later that year after Riddick Bowe gave up the title to avoid defending it against Lewis. He defended the title three times before an upset knockout loss to Oliver McCall in 1994. Lewis avenged the loss in a 1997 rematch to win back the vacant WBC title.

Two fights against Evander Holyfield in 1999 (the first ending in a controversial draw). Saw Lennox Lewis signed memorabilia become undisputed heavyweight champion. By unifying his WBC title with Holyfield’s WBA and IBF titles, as well as the vacant IBO title. In 2000, the WBA stripped Lewis of their title when he chose to face Michael Grant. Instead of mandatory challenger John Ruiz. Similarly, the IBF stripped Lewis of their title in 2002 when he chose not to face their mandatory challenger Chris Byrd.

Furthermore, Lewis was knocked out by Hasim Rahman in an upset in 2001; but this defeat avenged later in the year. In 2002, Lewis defeated Mike Tyson autographs in one of the most highly anticipated fights in boxing history. Prior to the event, Lewis was awarded the Ring magazine heavyweight title, which had been discontinued in the late 1980s. In what would be his final fight, Lewis defeated Vitali Klitschko in a brutal and bloody encounter in 2003. He vacated his remaining titles and retired from boxing in 2004.

As you can see, Lennox usually adds the year next to his signature: 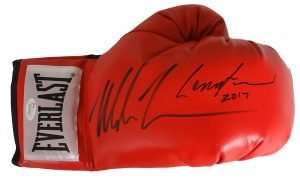 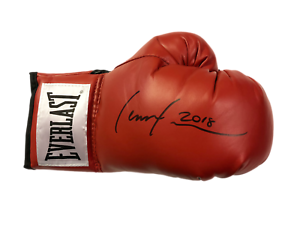