How much are Led Zeppelin Autographs worth? Autograph Value

Led Zeppelin was an English rock band that established in 1968 in London. Robert Plant autographs, guitarist Jimmy Page autographs; bassist/keyboardist John Paul Jones signed memorabilia, and drummer John Bonham signed memorabilia made comprised the band. They are credited as one of the forefathers of hard rock and heavy metal, owing to their powerful, guitar-driven sound; however their approach drew from a number of influences, including blues and folk music. Led Zeppelin is credited with having had a considerable influence on the music industry; especially in the creation of album-oriented rock (AOR) and stadium rock. 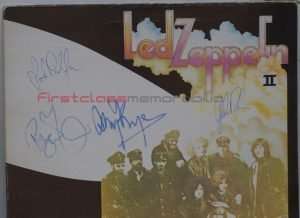 Led Zeppelin autographs, once known as the New Yardbirds, had a deal with Atlantic Records that provided them a lot of creative flexibility. They were initially disliked with critics, but they went on to have a huge financial success with eight studio albums released over a ten-year period. Then again, Led Zeppelin, released in 1969, was a top-ten album in various countries; including songs like “Good Times Bad Times,” “Dazed and Confused,” and “Communication Breakdown.” “Ramble On” and “Whole Lotta Love” were among the songs on Led Zeppelin II (1969), their first number-one album.

They published Led Zeppelin III in 1970, which included “Immigrant Song.” With 37 million copies sold, their unnamed fourth album, also known as Led Zeppelin IV (1971); is one of the best-selling albums in history. “Black Dog,” “Rock and Roll,” and “Stairway to Heaven” are among the album’s most popular and influential tracks; with the latter being one of rock’s most popular and influential pieces. “The Ocean,” “Over the Hills and Far Away,” and “The Rain Song” are among the songs from Houses of the Holy (1973). Then again, “Trampled Under Foot” and “Kashmir” were featured on Physical Graffiti (1975), a double album. 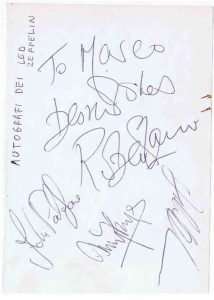 Valuations of signed collectibles always depends on a number of factors. Such as, when the autographs were signed. Led Zeppelin in their later days were harder to get near so these are much more rarer.

Other factors include, condition of the item and autographs. Pen that was used, the item that’s been signed such as paper, photograph, album etc. The rarer the item, the higher their value and the more demand from fans and collectors. 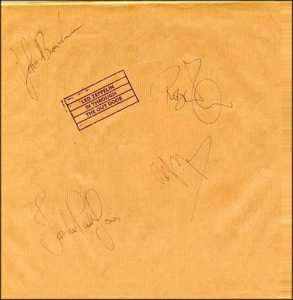 The value of Led Zeppelin Autographs drastically increase yearly; many people suggesting they are less Led Zeppelin full set of autograph then they are of The Beatles.

This being the case, signed albums and photographs are worth a lot of money.

In 2005, I purchased a full set of autographs for £900, ten years later I sold these for £5000. Also, that shows the demand and good investments autographs are.

In April, 2022. A full set of autographs on a Led Zeppelin 4 album sold at $41,000 with premium fees at an auction. Sometimes the market can be crazy and with auctions either going high or low.

Furthermore, we’ve been very fortunate to of had many great signed Led Zeppelin memorabilia. These piece make great investments for fans and collectors.