Jörg Albertz (born 29 January 1971) is a German former professional footballer who played as a midfielder. Between 1996 and 1998, he played three international games for the Germany national team.

As both a youth player and apprentice, Albertz played for PSV Mönchengladbach and Borussia Mönchengladbach. His first professional contract signed in 1990 for Fortuna Düsseldorf. Where he earned himself the nickname “The Hammer” for his powerful long range shots. When the team from the Rhineland were relegated to the second tier of the Bundesliga, Albertz moved to Hamburg where he soon became the public hero of the team. Two seasons later he became the club captain.

In 1996, Albertz signed for Rangers for £4m. He helped them to their ninth Scottish league championship title in a row; and scored a famous free-kick against rivals Celtic in January 1997. Albertz became a huge favourite with the Rangers fans, but after the departure of manager Walter Smith in June 1998; frequently left out of the starting line-up by the incoming Dick Advocaat. Despite this, he also won league championship medals in 1999 and 2000.

He returned to Hamburg in 2001. Despite the hype of his return, unable to live up to the hopes that people had on his shoulders. Before the beginning of season 2002–03 he transferred to Chinese club Shanghai Shenhua. He initially gained success with them when he won the 2003 league title. Unfortunately in 2003 the Chinese Football Association would revoke the league title after it was discovered the Shenhua General manager Lou Shifang had bribed officials to give favourable decisions to Shenhua in games that season.

Having had a moderately successful spell in China, Jorg Albertz autographs moved back to Germany in 2004; his re-initiation into the German game coming with Greuther Fürth. On the receiving end of many injuries, he switched to Fortuna Düsseldorf once again, where he retired at the end of the 2006–07 season.

On 11 March 2008, Jorg Albertz signed memorabilia confirmed he was training with Clyde. A view to a short-term move, to help out Clyde manager and former Rangers teammate John Brown. Albertz signed for Clyde on 14 March 2008. He made his debut the following day, scoring a trademark free kick in a 1–1 draw with Stirling Albion. He scored Clyde’s winning goal with another free kick in an important 2–1 victory over St Johnstone on 25 March, to lift Clyde out of the relegation play-off zone. After helping Clyde stay in the Scottish First Division via the playoffs, Albertz went into retirement once again, after making eight appearances for the club, scoring twice. 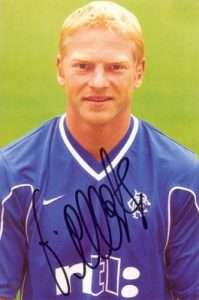 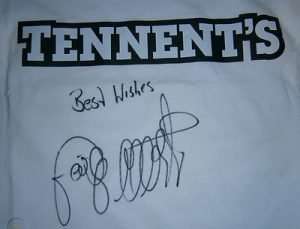 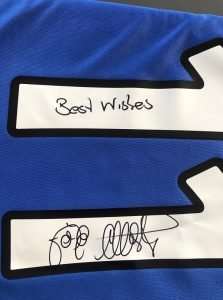