John Mayall, OBE (born November 29, 1933) is an English blues singer, musician, and songwriter whose career spans more than sixty years. In the 1960s, he founded John Mayall & the Bluesbreakers, a band that included some of the most prominent blues and blues rock performers.

Mayall was born in Macclesfield, Cheshire, in 1933 and grew up in Cheadle Hulme. Murray Mayall, a guitarist and jazz lover, was his father. Drawn to the sounds of American blues players like Lead Belly, Albert Ammons, Pinetop Smith, and Eddie Lang at a young age and taught himself to play the piano, guitars, and harmonica.

Mayall was sent to Korea as part of his national duty and purchased his first electric guitar in Japan during a time of leave. Back in England, he enrolled at Manchester College of Art and joined the Powerhouse Four, a semi-professional band. He got a work as an art designer after college, but he continued to play with local musicians. In 1963, he decided to pursue a full-time musical career and relocated to London. His previous experience would come in handy when designing the covers for many of his upcoming albums. 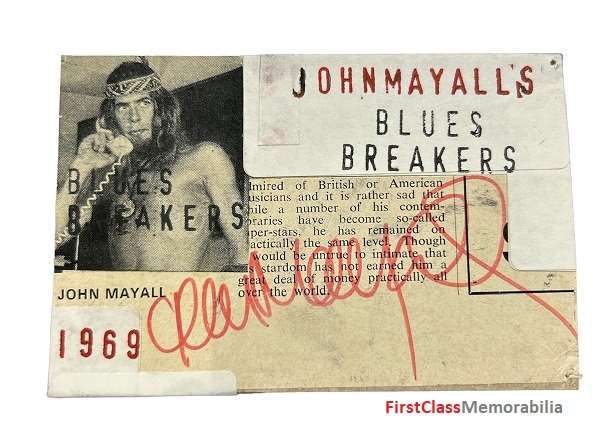 The Bluesbreakers began receiving significant notice in 1965, with Eric Clapton autographs as their new guitar player. That July, the band recorded two songs for a single, “I’m Your Witchdoctor” and “Telephone Blues” (released in October). However, in August, Clapton embarked on a trip to Greece. With a group of relative musical amateurs known as the ‘Glands.’ Bluesbreaker guitarists John Weider, John Slaughter. And Geoff Krivit all tried to step in before Peter Green took over. John McVie was fired, and for the next few months, Jack Bruce from the Graham Bond Organisation filled in on bass.