Jeremy Andrew Bulloch (16 February 1945 – 17 December 2020) was an English actor. During a career that spanned more than six decades, he gained recognition for originating the physical portrayal of Boba Fett in the Star Wars franchise, appearing as the character in the films The Empire Strikes Back (1980) and Return of the Jedi (1983). He returned to the franchise in a different role for 2005’s Revenge of the Sith. He also appeared in numerous British television series, including Doctor Who and Robin of Sherwood.

In a career spanning over half a century, Bulloch best known for his role in Boba Fett’s costume in the Star Wars films; The Empire Strikes Back and Return of the Jedi, despite the character’s “minimal screen time.” Toby Hadoke writes that “his precise body language and smouldering presence were … integral to the character’s appeal.” The voice, provided by Jason Wingreen originally and in the updated versions by Temuera Morrison, to strengthen the connection with the Prequel Trilogy. Bulloch’s half-brother, Robert Watts, who was working as an associate producer for Empire; tasked with finding someone who “would fit in the costume of Boba Fett.” So Watts called Bulloch (who at the time was working on Agony) and encouraged him to see Tiny Nicholls; the wardrobe supervisor and Bulloch had a costume fitting as Boba Fett, which “took 20 minutes to put on.”

Additionally, he played a minor role as an Imperial officer (later identified as Lieutenant Sheckil). Who grabs Leia when she warns Luke Skywalker of Vader’s trap in The Empire Strikes Back. Bulloch was initially to do the scene as Fett when he fires at Skywalker on Cloud City. But with no one available to play the part, Bulloch went to the wardrobe. And changed into the “Imperial Officer’s outfit”. This was his only non-masked appearance in the original Star Wars films. John Morton, who portrayed the rebel pilot Dak Ralter (during the Battle of Hoth). Covered Bulloch as a body double for Fett; when the character confronts Vader in the Bespin hallway during Han Solo’s torture. 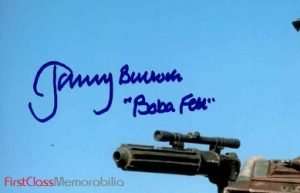 Bulloch returned as Boba Fett for the fan film mockumentary: Return of the Ewok chasing Wicket on the Death Star. He filmed his scenes for Jedi for four weeks. Bulloch, unaware of Fett’s apparent demise prior to filming and disappointed; since he would have liked to do more with his character. Bulloch said that portraying Fett was the most uncomfortable role he played; and that putting on the jetpack “was very heavy.” Fett’s death in Return of the Jedi would later, reconnected in the Disney+ series The Mandalorian; in which Bulloch had no involvement.

While portraying Fett, Bulloch drew some inspiration from Clint Eastwood’s the Man with No Name. Both Fett and Eastwood’s character in A Fistful of Dollars wear similar capes, cradle their gun, ready to shoot and move in slow motion. In an interview in 2014, Bulloch recalled when he said to an Imperial Officer (before Fett leaves Cloud City on Slave I with Solo frozen in carbonite), “Put Captain Solo in the cargo hold,” when he actually said, “Put Captain Cargo in the Solo Hold.” 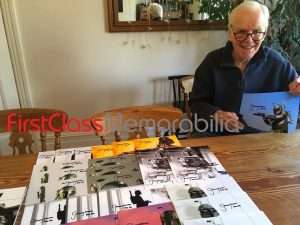 In 2004, Jeremy Bulloch autographs published a limited edition memoir; Flying Solo. Which is a humorous account of his personal and professional life, interspersed with tales from the convention circuit. In 2005, for the first time in 22 years; once again made an appearance in a Star Wars film, Revenge of the Sith. This time he portrayed Captain Jeremoch Colton piloting Kenobi. Bail Organa and Yoda to Coruscant in an Alderaan Cruiser. (Later identified as the Sundered Heart and similar to the first vessel to appear in Star Wars). Afterwards, Bulloch played a small cameo role in Star Wars fan films Order of the Sith: Vengeance and its sequel Downfall – Order of the Sith, alongside Dave Prowse and Michael Sheard. These fan film, made in England in support of Save the Children.

In an interview in 2013, he expressed an interest in being involved in a future Star Wars film in some way. Saying; “The lovely thing is … if I’m wearing a helmet, no one knows how old I am.” He subsequently denied involvement in future projects. Although Boba Fett autographs did not appear in Star Wars: The Force Awakens, long before the film’s release, Bulloch autographs hinted that an anthology film, which will focus on the origins of Boba Fett would be made. This has ultimately been replaced by The Book of Boba Fett.

Also, featured in the 2015 documentary Elstree 1976; a behind-the-scenes film, which focuses on the lives of some actors and extras who appeared in the Star Wars original trilogy. The documentary had a premiere at the BFI London Film Festival.