Sir John Young Stewart OBE (born 11 June 1939) is a British former Formula One racing driver from Scotland. Nicknamed the “Flying Scot”, he competed in Formula One between 1965 and 1973, winning three World Drivers’ Championships and twice finishing as runner-up over those nine seasons.

Outside of Formula One, he narrowly missed out on a win at his first attempt at the Indianapolis 500 in 1966, and competed in the Can-Am series in 1970 and 1971. Between 1997 and 1999, in partnership with his son, Paul, he was team principal of the Stewart Grand Prix Formula One racing team.

After retiring from racing Stewart was an ABC network television sports commentator for both auto racing, covering the Indianapolis 500 for over a decade, and for several summer Olympics covering many events. Stewart also served as a television commercial spokesman for both the Ford Motor Company and Heineken beer.

Stewart was also instrumental in improving the safety of motor racing, campaigning for better medical facilities and track improvements at motor racing circuits.

After John Surtees’ death in 2017, he is the last surviving Formula One World Champion from the 1960s.

At Spa-Francorchamps in 1966, Stewart ran off the track while driving at 165 mph (266 km/h) in heavy rain; and crashed into a telephone pole and a shed before coming to rest in a farmer’s outbuilding. His steering column pinned his leg, while ruptured fuel tanks emptied their contents into the cockpit. There were no track crews to extricate him, nor were proper tools available. Stewart, rescued by fellow drivers Graham Hill and Bob Bondurant who had also crashed nearby. There were no doctors or medical facilities at the track, and Stewart put in the bed of a pickup truck, remaining there until an ambulance arrived.

First taken to the track’s first aid centre, he waited on a stretcher, which placed on a floor strewn with cigarette ends and other rubbish. Finally, another ambulance crew picked him up, but the ambulance driver got lost driving to a hospital in Liège. Ultimately, a private jet flew Stewart back to the UK for treatment.

After his crash at Spa, Stewart became an outspoken advocate for auto racing safety. Later, he explained, “If I have any legacy to leave the sport I hope it will be seen to be an area of safety because when I arrived in Grand Prix racing so-called precautions and safety measures were diabolical.” By Stewart’s reckoning, a driver who raced for five years had a two-thirds chance of being killed in a crash.

Stewart campaigned with Louis Stanley (BRM team boss) for improved emergency services and better safety barriers around race tracks. “We were racing at circuits where there were no crash barriers in front of the pits; and fuel was lying about in churns in the pit lane. A car could easily crash into the pits at any time. It was ridiculous.” As a stop-gap measure, Stewart hired a private doctor to be at all his races, and taped a spanner to the steering shaft of his BRM in case it would be needed again. Stewart pressed for mandatory seat belt usage and full-face helmets for drivers, which have become unthinkable omissions for modern races.

Some drivers and press members believed the safety improvements for which Jackie Stewart autographs advocated detracted from the sport; while track owners and race organizers baulked at the extra costs. “I would have been a much more popular World Champion if I had always said what people wanted to hear. I might have been dead, but definitely more popular.”, Stewart later said. 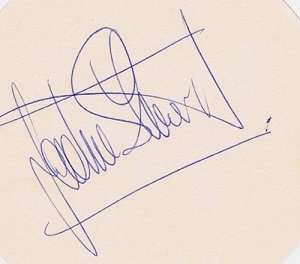 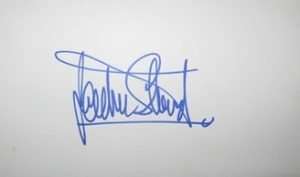 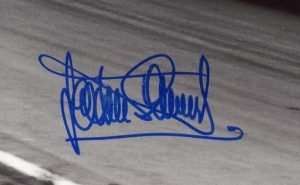 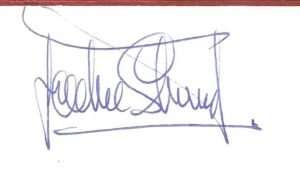