How much is Tina Turner’s Autograph worth?

Find out How much is Tina Turner’s Autograph worth? Genuine signed Memorabilia from Tina Turner.

Tina Turner is a Swiss singer and actress who was born in the United States on November 26, 1939, as Anna Mae Bullock. She became well-known as the lead singer of the Ike and Tina Turner Revue before beginning a lucrative solo career, earning her the title “Queen of Rock ‘n’ Roll.”

In 1957, Turner made her professional debut with Ike Turner’s Kings of Rhythm. She made her debut on her first album, “Boxtop,” as Little Ann, in 1958. She made her debut as Tina Turner in 1960 with the popular duet song “A Fool in Love.” Ike & Tina Turner rose to the status of “one of history’s most fearsome live performances.” Before breaking up in 1976, they had singles like “It’s Gonna Work Out Fine,” “River Deep – Mountain High,” “Proud Mary,” and “Nutbush City Limits.” 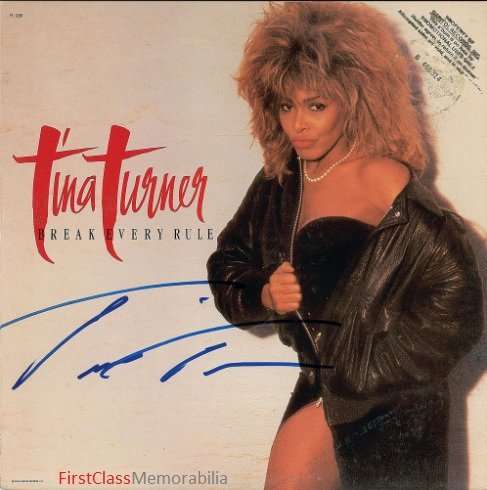 Break Every Rule promotional album signed prominently on the front cover in blue felt tip. Sold for $245 in July 2018

Turner began “one of the biggest comebacks in music history” in the 1980s. What’s Love Got to Do with It, which won the Grammy Award for Record of the Year and became her first and only number one song on the Billboard Hot 100. Featured on her multi-platinum 1984 album Private Dancer. She was the oldest female solo artist to reach the top of the Hot 100 at age 44. With “Better Be Good to Me,” “Private Dancer,” “We Don’t Need Another Hero (Thunderdome”),” “Typical Male,” “The Best.” “I Don’t Wanna Fight,” and “GoldenEye,” she continued to have chart success. She established a record for a solo performer’s highest paid audience (180,000) during her Break Every Rule World Tour in 1988. 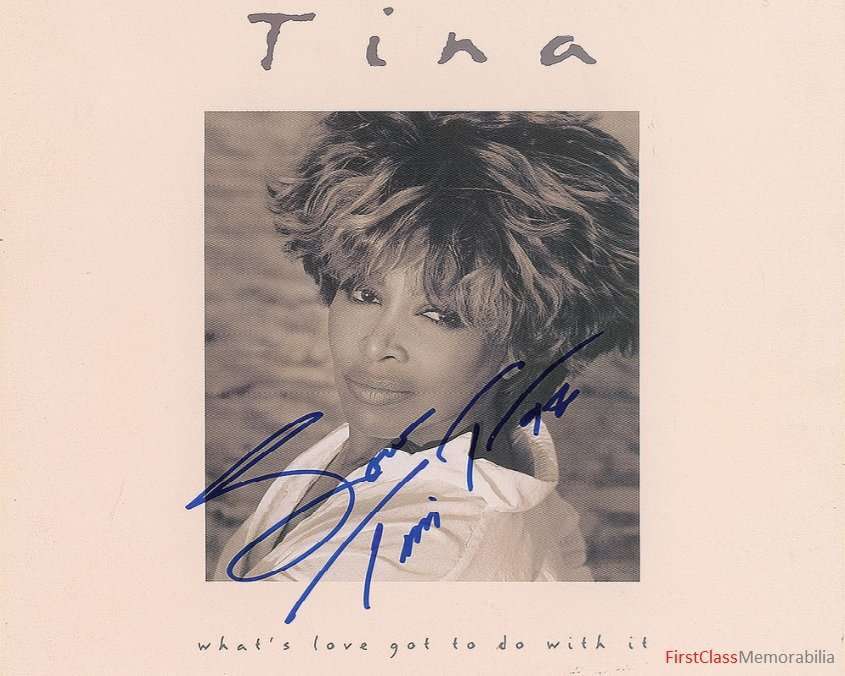 Along with Tommy (1975), Mad Max Beyond Thunderdome (1985), and Last Action Hero, Turner appeared in three other movies (1993). A biopic based on her memoirs I, Tina: My Life Story, What’s Love Got to Do with It, released in 1993. After finishing her Tina!: 50th Anniversary Tour. Which is the 15th-highest-grossing tour of the 2000s, Turner announced her retirement in 2009. She was the focus of the Tina jukebox musical in 2018.

One of the most successful music autographs artists of all time, Turner has sold more than 100 million records worldwide. Collecting 12 Grammy Awards, including a Grammy Lifetime Achievement Award, three Grammy Hall of Fame Awards. Eight awards given in competition. the first female and black performer to grace Rolling Stone’s cover. She was listed among the 100 Greatest Singers and Artists of All Time by Rolling Stone. Besides, both the Hollywood Walk of Fame and the St. Louis Walk of Fame include stars for Turner. twice inducted into the Rock & Roll Hall of Fame—as a solo artist in 2021 and with Ike Turner in 1991. Awarded Women of the Year and Kennedy Center Honors in 2005, as well.

3 replies on “How much is Tina Turner’s Autograph worth?”