How much is Marilyn Monroe’s Autograph Worth? Signed Movie Memorabilia

American actress Marilyn Monroe (Norma Jeane Mortenson; born June 1, 1926; died August 4, 1962) known for portraying humorous “blonde bombshell” roles. among the most well-liked sex icons of the 1950s and the first half of the 1960s. And a symbol of the sexual revolution of the time. By the time of her death in 1962, her films had earned $200 million, which is equal to $2 billion in 2021. She was a leading lady for a decade. Monroe has remained a significant pop culture symbol for a very long time. Furthermore, she was named sixth on the American Film Institute’s list of the best female film legends from the Hollywood Golden Age in 1999. Also, Monroe has been praised by numerous media outlets and film reviewers as one of the greatest actors to never win an Oscar. 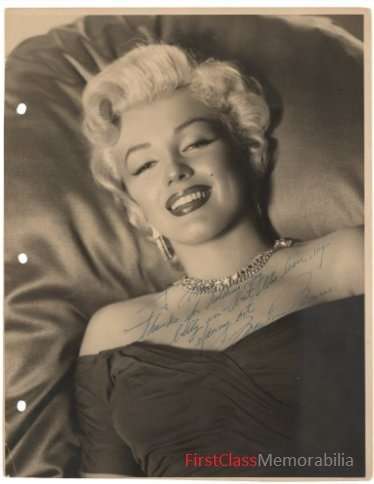 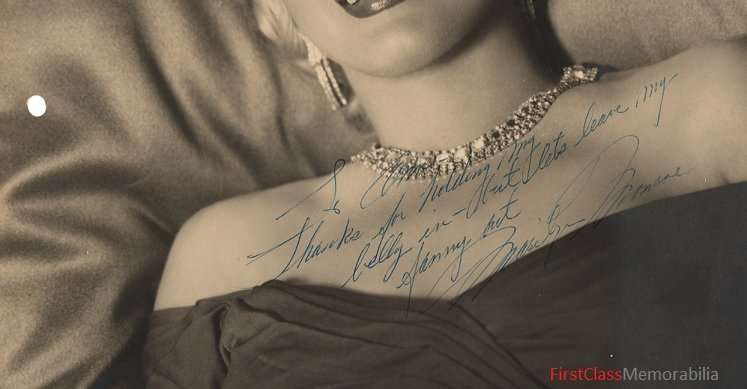 Vintage matte-finish 10.75 x 13.75 photo of Monroe reclining on a pillow and wearing a low-cut dress and diamond jewellery, a pose from circa 1953. Signed and inscribed in blue ballpoint, “To Ann—Thanks for holding my belly in—But lets leave my fanny out, Marilyn Monroe.” Sold for $16,500 in September 2021.

What Marilyn Monroe memorabilia should I invest in:

Anything signed by Marilyn Monroe is always going to increase in value but its like buying a house. The more you spend today, the more it’ll be worth in the future. Many of use wouldn’t be able to buy the museum pieces that’s why I tell collectors. Anything that is signed will always increase in value.

The top item would be a signed photograph. Undedicated signatures are worth the most unless it.s dedicated to someone well known.

The second would be any signed documentation, ie signed Cheques (checks), documents, contracts etc. These are very rarely forged so they are always buyers out there purchasing Marilyn Monroe signed documents due to this fact.