How much is Bruce Lee’s autograph worth? Autograph Value

FirstClassMemorabilia answer to How much is Bruce Lee’s autograph worth? Autograph Value. Brought to you by the Bruce Lee autograph expert: Greig McArthur. 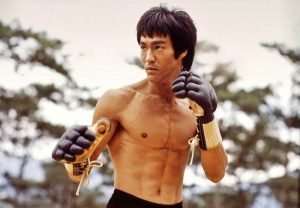 I have been dealing in Bruce Lee signed memorabilia since the late 90’s. A lot has changed since then, the market value of Bruce Lee’s autographs are at an all time high. With, every year the value of these only increasing and very much so.

Bruce Lee died at a very young age and he was only a star at the time in China. He was known elsewhere for The Green Hornet but his international stardom never came till after his passing; when Enter the Dragon got released.

Due to his short life and career in the eye, memorabilia of Bruce Lee has always been very scarce. In 1994/5 Linda Lee, Bruce’s wife and Brandon’s mother auctioned off many artefacts from both their careers. Items such as, worn clothes, signed checks, letters etc to movie used memorabilia.

Yearly, the demand for authentic Bruce Lee autographs increase rapidly; as we all know, Bruce is seen as an Icon of the generation. Everywhere you go you see his image.

Bruce Lee’s autograph is classed as one of the top 3 rarest and highly collectible movie memorabilia. He joins in the list the late James Dean and also the gorgeous Marilyn Monroe. All three of these stars died to early and are massively iconic stars in the Movie industry.

Sadly, in the autograph / memorabilia business, forgeries is a massive concern. The more rare the autograph, the more forgeries are flooding the market. Its sad to say, that to this day we’ve also witnessed Bruce Lee’s friends, cashing in on him.

One thing also to keep an eye on it fake Certificates of Authenticity. Unless its from someone who studies Bruce Lee autographs then be extremely careful. I have seen many times over the years fake COA’s from Bruce’s family and friends. Fake COA’s with a family members name on them selling fake belongings and signed memorabilia. These have also fooled many top auction houses in the world. 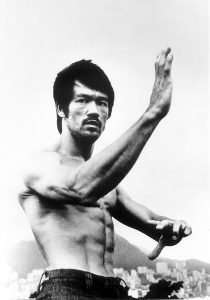 One question often asked to me and a hard one to answer. End of the day, the value of something is how much someone is willing to pay for it at that time. Saying this, when I first started collecting Bruce Lee signed memorabilia, you could get a signed piece of paper for around £1200 – £1500 in the late 90’s.

Signed letters back then were reaching £5000-£8000 depending on condition and the content of these letters.

As you can see the rise of these signed piece of memorabilia by Bruce, its not hard to see why people invest in them. Values only go up plus rarer items such as Bruce Lee, the investment percentage is much higher due to the rarity of these. 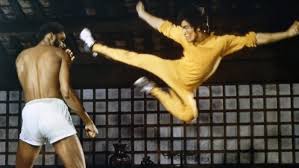 Bruce Lee (November 27, 1940 – July 20, 1973), born Lee Jun-fan, was a Hong Kong and American martial artist, martial arts instructor, actor, director and philosopher. The founder of Jeet Kune Do, a hybrid martial arts philosophy drawing from different combat disciplines that is often credited with paving the way for modern mixed martial arts (MMA). Lee, considered by critics, media, and other martial artists to be the most influential martial artist of all time and a pop culture icon of the 20th century, who bridged the gap between East and West. Credited with promoting Hong Kong action cinema and helping to change the way Asians were presented in American films.

Bruce Lee was the son of Cantonese opera star Lee Hoi-chuen, who was based in British Hong Kong. He was born in San Francisco on November 27, 1940 while his parents were visiting the city for his father’s tour abroad. The family returned to Hong Kong a few months later. Introduced to the Hong Kong film industry as a child actor by his father. His early martial arts experience included Wing Chun (trained under Yip Man), tai chi, boxing, and street fighting (frequently participating in Hong Kong rooftop fights). In 1959, Lee moved to Seattle. In 1961, he enrolled in the University of Washington.

It was during this time in the U.S. that he began teaching martial arts, later drawing significant attention at the 1964 Long Beach International Karate Championships in California. His students included famous celebrities such as Chuck Norris, Sharon Tate, and Kareem Abdul-Jabbar. In the 1970s, his Hong Kong and Hollywood-produced films elevated the Hong Kong martial arts films to a new level of popularity and acclaim, sparking a surge of Western interest in Chinese martial arts. The direction and tone of his films dramatically influenced and changed martial arts and martial arts films worldwide.

Noted for his roles in five feature-length Hong Kong martial arts films in the early 1970s: Lo Wei’s The Big Boss (1971) and Fist of Fury (1972); Golden Harvest’s Way of the Dragon (1972), directed and written by Lee; and Golden Harvest and Warner Brothers’ Enter the Dragon (1973) and The Game of Death (1978), both directed by Robert Clouse. Lee became an iconic figure known throughout the world, particularly among the Chinese, based upon his portrayal of Chinese nationalism in his films, and among Asian Americans for defying stereotypes associated with the emasculated Asian male. Furthermore, Having initially learnt Wing Chun, tai chi, boxing, and street fighting, he combined them with other influences from various sources into the spirit of his personal martial arts philosophy, which he dubbed Jeet Kune Do (The Way of the Intercepting Fist).

Lee died on July 20, 1973, at the age of 32. Since his death, Lee has continued to be a prominent influence on modern combat sports, including judo, karate, mixed martial arts, and boxing, as well as modern popular culture, including film, television, comics, animation and video games. Time named Lee one of the 100 most important people of the 20th century. 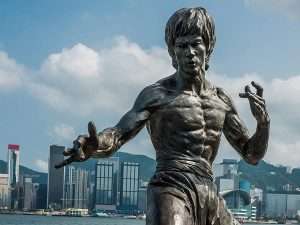