How much are The Beatles Autographs worth?

A question we get asked often is How much are The Beatles Autographs worth?. This is a difficult question as a lot of things make items more rarer than other.

Sad thing is, around 80% of The Beatles signatures that are found online in marketplace place auctions etc are most fake. Forgers love trying to copy The Beatles autographs to gain a quick buck. Thankfully with years of experience you learn to understand the signers writing styles; pen pressures, and many more interesting factors.

Due to The Beatles being the biggest band in the world, who changed music history and had such a massive presence during pop culture era; the value of authentic Beatles memorabilia is only every increasing in value each year.

During the mid to late 90’s I personally started collecting autographs. Back then many celebrities were happy to sign their autographs for fans. But gaining access to such high figures were near impossible. During this time, I started studying The Beatles handwriting styles, learning the differences of each year the Beatles were together and seeing their changes in signatures.

Demand then was increasing, I remember being able to purchase a full set on the one page for anywhere between £800 – £1200, condition being a big factor in the later figure.

The Beatles during their later years never toured, access to the members were near impossible. Due to the rarity of the band members being out in public; their autograph prices for these years are massively higher than the early 60’s.

Signatures from 1967 and onwards, full sets are most rarer and demand high figures. 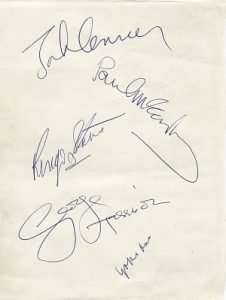 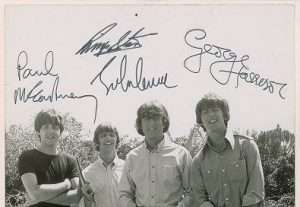 Signed Vinyl’s are what the collectors tend to go for. These are big big money in the memorabilia market. The same goes with signed Lps; the later years are the most rarest and hit high records. Ive seen early examples reaching £10,000 to Abbey Road, White Album hitting over £80,000. As you can see these are great investments in any form. 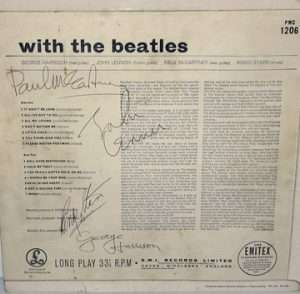 NOTE: A number of factors are to determine valuations, condition, pens used, era of the signature, provenance plus many more factors.

If you are looking to Sell your Beatles Autographs, please send us a message via CONTACT US Page