Sir Geoffrey Charles Hurst MBE, an English former professional footballer, was born on December 8, 1941. He is still the first striker to score a hat-trick in a World Cup final, which England won 4-2 over West Germany in 1966 at Wembley Stadium.

Hurst started his professional career with West Ham United. Where he made 500 first team games and registered 242 goals. He won the FA Cup and the European Cup Winners’ Cup there in 1964 and 1965, respectively. For £80,000, he was traded to Stoke City in 1972. He spent three seasons with Stoke, where he won the Watney Cup in 1973. And West Bromwich Albion, where he concluded his Football League career in 1976. Before returning to England to take over non-league Telford United. Hurst played football for Cork Celtic and the Seattle Sounders in the United States. Prior to managing Chelsea autographs for two years from 1979 to 1981, he also served as an England coach. After leaving the game to focus on his business responsibilities, he later coached Kuwait SC.

He played 49 times for England and netted 24 goals in total. In addition to the 1966 World Cup, he also competed in the 1968 UEFA Euro and the 1970 FIFA World Cup. Prior to focusing on football, he also had a brief cricket career, playing one first-class match for Essex in 1962.

On February 23, 1966, Hurst faced West Germany in his senior England debut. He performed admirably, and his subsequent action against Scotland and Yugoslavia earned him a spot in the 1966 World Cup roster. Jimmy Greaves and Roger Hunt were chosen in his place for the last friendly game against Poland because he had underwhelming performances in the warm-up matches against Finland and Denmark. Greaves and Hunt were selected for the three group matches against Uruguay, Mexico, and France. However, Greaves needed stitches after suffering a serious leg gash in the latter match, and Hurst was called up to fill in for him in the quarterfinal match against Argentina.

Although they had skill, Argentina played with a more aggressive style that reduced them to ten men. As the game neared its last 15 minutes, it was still closely contested, but Martin Peters sent in a curling cross from the left flank, and Hurst, anticipating his clubmate’s move, dribbled in front of his defender to glance a near post header beyond the Argentine goalkeeper. England advanced to the semifinals with a 1-0 victory. 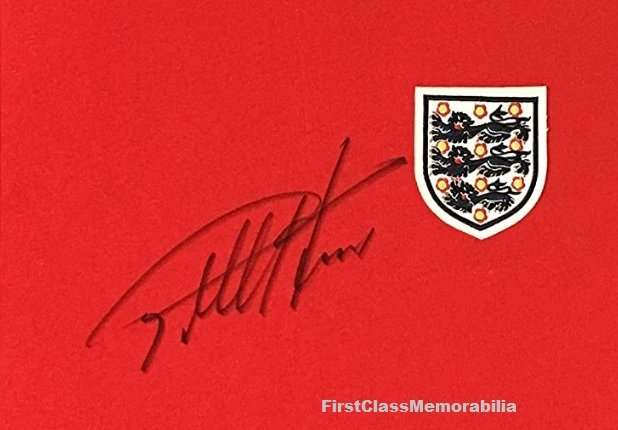 Hurst and Hunt played up front since Greaves was unable to play against Portugal. England autographs triumphed 2-1 thanks to two goals from Bobby Charlton, the second of which Hurst assisted. The media became aware of Greaves’ return to fitness as the final match against Germany drew near, and although acknowledging Hurst’s contribution, they began to clamour for the return of England’s most productive centre forward. Hurst was chosen by Ramsey for the final, despite his refusal to be persuaded.