Terence Michael Joseph “Geezer” Butler (born 17 July 1949) is a British musician and songwriter. He is best known as the bassist and primary lyricist of the heavy metal band Black Sabbath autographs. He has also recorded and performed with Heaven & Hell, GZR, and Ozzy Osbourne. Butler is currently the bassist of Deadland Ritual.

Butler received the nickname “Geezer” at approximately age eight, because he used to call everybody ‘Geezer’ at school. “It was just a slang term for a man”, said Butler.

Butler grew up in a working-class Irish Catholic family in Birmingham. The Butler family had seven children and were poor, typically having “no money whatsoever”. Two of Butler’s older brothers had been called upon to serve in the army; and in the Vietnam War era, Butler feared that he would be next. However, mandatory service ended in England a couple of years before he due to be conscripted.

Butler was heavily influenced by the writing of Aleister Crowley as a teenager. By his late teens, he had stopped attending Mass. He cited a loss of belief; and feels that everyone should sooner or later decide for themselves what to believe in. By the end, Butler was “going to Mass every Sunday just to take a look at all the nice girls; that were going there”, he recalled years later

Butler formed his first band, Rare Breed, in late 1967, with John “Ozzy” Osbourne soon joining as lead vocalist. At that time, Butler was dating a girl who lived near Tony Iommi, and Iommi’s earliest memories of Butler involved seeing him walking past his house every day to visit her. Later, Iommi and Butler became acquainted when their bands played at a nearby nightclub. Separated for a time, Osbourne and Butler reunited in the blues foursome, Polka Tulk; along with guitarist Iommi and drummer Bill Ward, both of whom had recently left the band Mythology. They renamed their new band Earth; but a band already existed in the small-time English circuit with the same name, so forced to change the name yet again. Inspired by the popular Boris Karloff horror film of the same name, Butler suggested the name Black Sabbath in early 1969.

Additionally, Inspired by John Lennon, Butler played rhythm guitar in his pre-Sabbath days, including with Rare Breed. When Sabbath formed, Iommi made it clear that he did not want to play with another guitarist, so Butler moved to bass. According to Butler, “I’d never played bass until I was on stage at the first gig that we played. Borrowed the bass guitar off one of my friends and it only had three strings on it.” Butler lists Jack Bruce of Cream as his biggest influence as a bassist. Iommi described Butler as being “from another planet” in the band’s early days; he took LSD, wore Indian hippie dresses, and was very peaceful. At the time Black Sabbath was formed, Butler studying to become an accountant, and this training resulted in him managing the band’s finances in the early days.

After Black Sabbath fired vocalist Ozzy Osbourne in 1979. Butler also briefly left the band to deal with the divorce from his first wife. The 1980 album Heaven and Hell recorded with bassist Craig Gruber but Butler returned to the band at the last minute. And re-recorded the bass parts prior to release. Besides, he again left the band in 1984 after touring in support of their 1983 album, Born Again, though he returned months later as the band attempted a comeback with vocalist David Donato.

In 1988, Butler joined the backing band of his former Sabbath bandmate. Osbourne to take part in the No Rest for the Wicked World Tour. Rejoining Black Sabbath in 1991 for the reunion of the Mob Rules line-up. But again quit the group after the Cross Purposes tour in 1994.

In 1995 Geezer Butler autographs again joined Osbourne’s band to perform on the Ozzmosis album. After recording Ozzmosis, he formed G/Z/R, issuing Plastic Planet in 1995. His next solo album, Black Science, followed in 1997. Butler returned to Sabbath once more for the 1997 edition of Ozzfest, and has remained with the band since. In 2005 he released Ohmwork, his third solo album. In October 2006 it was announced that Butler, along with Tony Iommi, would be reforming the Dehumanizer-era Black Sabbath line-up with Vinny Appice and Ronnie James Dio Autographs, under the name Heaven & Hell to differentiate between the reunited touring band fronted by Osbourne, and the Dio-fronted version of the band.

Additionally, he rejoined Iommi and Osbourne to record 13 and toured in support of the album, which reached its conclusion in 2017. 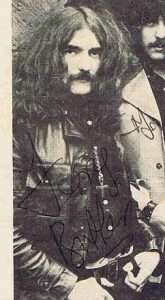 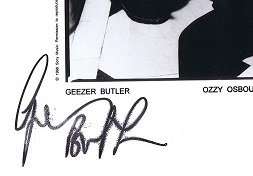 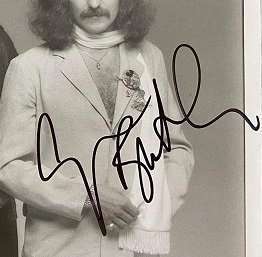 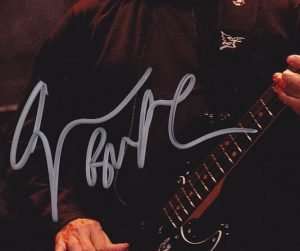