Frank James Lampard OBE (born 20 June 1978) is an English professional football manager; and former player who is the manager of Premier League club Everton. Considered to be one of Chelsea’s greatest players, and one of the greatest midfielders of his generation. Has the record of the most goals by a midfielder in the Premier league and scoring the highest number of goals from outside the box (41). In addition he was statistically named the Premier League Player of the Decade from 2000 to 2010.

A creative and technically gifted box-to-box midfielder, Lampard began his career in 1995 at West Ham United; the club where his father, Frank Lampard Sr., also played. Best known for his time at London rivals Chelsea; whom he signed for in 2001 for £11 million. In his thirteen years with the club, Lampard established himself as a prolific scorer from midfield; becoming Chelsea’s all-time leading goal scorer, with 211 goals scored in all competitions. Lampard won three Premier League titles, the UEFA Champions League; the UEFA Europa League, four FA Cups, and two Football League Cups. In 2005, named FWA Footballer of the Year, and finished runner-up for both the Ballon d’Or and FIFA World Player of the Year. After leaving Chelsea, Lampard played for league rivals Manchester City; and Major League Soccer (MLS) club New York City FC before retiring in 2017.

Furthermore, Lampard played 106 matches for the England national team, after making his debut in 1999. Representing his country at three FIFA World Cups – in 2006, 2010 and 2014 – and in UEFA Euro 2004, where he was named in the Team of the Tournament. Lampard scored 29 goals for England fc autographs, and was voted England Player of the Year in 2004 and 2005. He is also England’s most prolific penalty taker, with nine goals scored from the spot. Besides, after retiring from international football, he was appointed an Officer of the Order of the British Empire (OBE) in 2015 for services to football. After retiring, Lampard served as a team captain on the ITV sport panel show Play to the Whistle from 2015 until 2017. He has also written a number of children’s books. Signed football shirts

Lampard began his managerial career with Derby County in 2018, leading the club to the final of that season’s Championship play-offs. Appointed as Chelsea’s head coach a year later, guiding them to fourth place and the FA Cup Final in his first season. However, after a poor run of results, Lampard dismissed in 2021. Appointed Everton manager in 2022. 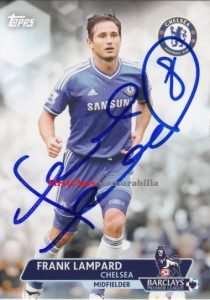 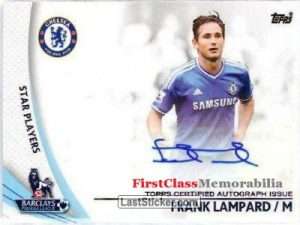 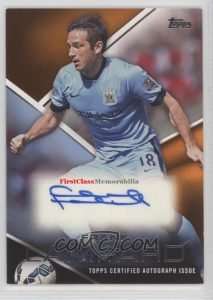 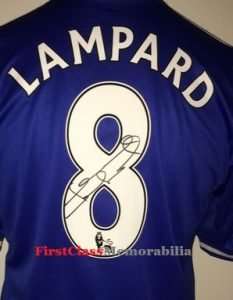 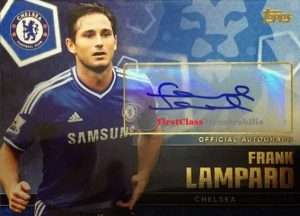