Brian Laudrup (born 22 February 1969) is a Danish former footballer who played as a winger, forward or as a midfielder. Regarded as one the most talented players of his generation. He currently works as a football commentator, pundit and analyst on Kanal 5 and 6’eren. Along with former international goalkeeper Lars Høgh, Laudrup manages a football academy for marginalised youth.

During his playing career which eventually stalled due to injury, Laudrup represented a number of European clubs. Started with Danish club Brøndby, winning two Danish championships in the late 1980s. He then played for German and Italian clubs; winning the 1993–94 Serie A as well as the 1994 UEFA Champions League title with Milan. He was a vital part of the Rangers memorabilia team which dominated the Scottish Premier Division in the 1990s, winning three championships, among others. Also, Won the 1998 UEFA Super Cup in his brief stint with English club Chelsea memorabilia. And had a brief spell with Copenhagen in Denmark, before ending his career with Ajax in 2000.

Laudrup also played 82 matches and scored 21 goals for the Denmark national team; and was a vital part of the Danish teams which won UEFA Euro 1992 and the 1995 Confederations Cup.

Furthermore, Laudrup won the Danish Football Player of the Year award a record four times. Besides, named by FIFA as the fifth-best player in the world in 1992. And named by Pelé autographs as one of the top 125 greatest living footballers at the FIFA 100 ceremony in March 2004, alongside his older brother Michael Laudrup. 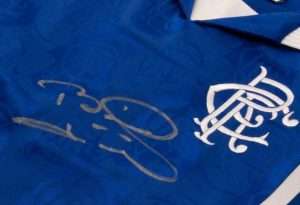 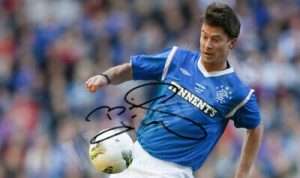 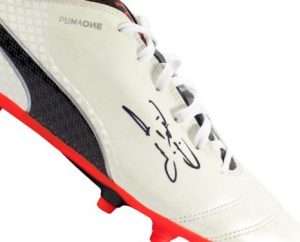